Start a Wiki
Agent Ted Rando is a Rare type partner introduced in Amateur Surgeon 4: Re-Generations. His unlockable partner surgery can be found under the label P21.

Ted Rando is a special secret agent with a mysterious reputation. Shielding his identity with a huge stuffed teddy bear head, Ted is an expert saboteur and appears to make great use of various tools. One of his well known gadgets is his high-tech wristwatch, which contains numerous sharp tools.

After being re-generated by Dr. Rashid in the lab, Ted is rendered unconscious as several of his gadgets had been forcefully lodged inside his body. He also ended up having bullets shot through his mask somehow. When successfully patched up, Ted throws a couple of silly puns before hopping onto Rashid's tea trolley, using it as a getaway vehicle from the lab.

I'm under strict orders not to peek inside that bear head...but it's full of bullet holes! I'm going to have to break the rules a little if he's going to survive!

Ted Rando is shown wearing a black suit and tie over a white shirt. His artwork always shows him holding a lighter and vacuum. His skin appears to be an olive tone. His true face is never revealed, for it is always hidden by the stuffed teddy bear head he wears over it. However, the player does get to unzip this head during his partner surgery, uncovering yet another line of defense which protects his real identity: a panda mask.

Judging from his actions after his operation, Ted is quick-thinking and shrewd, as well as having a witty tongue full of puns related to his bear head.

Fred Grando
Add a photo to this gallery

For most of this surgery, the scanner will be needed. Since Ted starts off with a low heart rate, you will want to use the injector on him first. Then make the incision into him. You will notice that no visible injuries are present. However, there are actually hidden objects inside Ted that you will need to find with the scanner and slice out with the pizza cutter. There are three strange gadgets hidden inside the pancreas, which will have to be extracted with the tongs once uncovered. Patch up the cuts as usual, then close up the incision and proceed to the next one. This time you will be inside the stomach area, where there are three more gadgets hidden in the stomach. When you've uncovered and extracted those objects, the last area where you'll have to repeat the same steps are the intestines. There are a total of three objects hidden.

After you have finished patching up the intestines, the final area that must be fixed is Ted's head. There are four bullet holes that can be mended with the stapler, lighter, and gel. Afterwards, use the chainsaw to remove the muzzle, which will then allow you to unzip Ted's head. To unzip it, grab the zipper with the tongs and drag it upward. This will take you inside to his face, which is hidden by a bullet-filled panda mask. Lift and remove the bullets with the tongs, then mend the leftover injuries with the gel. After finishing that up, you will be taken back outside of the teddy bear head to put it back together. Pull the zipper back down, then you will be given the muzzle to place back on the head to burn into place.

Since this surgery has many areas but little time, it may be a good idea to bring time saving partners with you such as Professor Rippov or Procrastibot 3000. Stoolie O'Toole is another useful partner for this surgery, for he can reveal the location of hidden objects for you.

Ted making a break for it on Rashid's beverage trolley 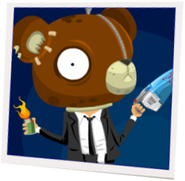 File photo
Add a photo to this gallery
Retrieved from "https://amateursurgeon.fandom.com/wiki/Agent_Ted_Rando?oldid=8512"
Community content is available under CC-BY-SA unless otherwise noted.