Bertrand is Dr. Alan Probe's roommate in Amateur Surgeon 4: Re-Generations. He was initially known as "Some old guy", acting as the 97th patient.

Whilst breaking into the retirement home to return Alan's brain piece, Ignacious Bleed II and Ophelia Payne sneak through the window into Bertrand's room, mistaking it for Alan's. Spooked by the breaking and entering, he hurriedly takes a huge helping of hard candy, which he proceeds to choke on.

The only thing more shameful than breaking into an old man's room is breaking into the WRONG room. We've startled the man into accidental death by hard candy. This was NOT part of the plan.

Old, frail and easily frightened, Bertrand appears wearing a robe over his striped pajamas, followed by a pair of fuzzy pink slippers. Hard candy covers various parts of his body, most of it covering his facial hair, which is later exposed post operation. Although he appears to have a mustache alongside his beard during surgery, it is not shown in the post-op cutscene.

This surgery can take a while to complete and may be difficult the first few times. The dark Robot Unicorn partner can help you destroy the candy in a flash. Otherwise you will have to do it the long way.

Use the chainsaw over the candy in a circular motion to break it down. Keep doing so until it breaks into debris to vacuum up. You will have to make sure to keep Bertrand's heart rate stabilized with the injector. After removing all the candy from his hair and face, saw off his beard as directed and remove it. Proceed into his esophagus and remove the lined up candy pieces with the tongs. Then use the chainsaw and break down the hard candy on the sides like before. Then close him up and make the incision into his heart.

Now this is where things may get a bit hard for you. Alongside the hard candy to saw off is Bertrand's pacemaker. It has a small timer on it with a red marking. If the little arrow passes this red area, it will cause a small shock which will damage Bertrand and count as a mistake on your part, resetting your score meter. In order to prevent this from happening, you have to use the car battery to shock the pacemaker, resetting it. You'll have to switch between chainsawing the candy and shocking the pacemaker, as well as patching up the wounds around the heart. Intense multi-tasking, but if done smoothly, everything will be fine. This is the final part of the surgery, along with a simple plop of his beard to gel back into place. 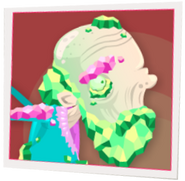 Ignacious never ceases to amuse us with his input

Bertrand freed from his candy coating
Add a photo to this gallery
Retrieved from "https://amateursurgeon.fandom.com/wiki/Bertrand?oldid=5850"
Community content is available under CC-BY-SA unless otherwise noted.