Start a Wiki
Boomin' Bessie is a Rare type partner from Amateur Surgeon 4: Re-Generations. She is the 2nd patient (P2) to be encountered during Dr. Rashid's partner-fixing quest.

Bessie is a young Texan woman who has a high fascination for guns. She's very handy with her blunderbuss, possessing a wide variety of trophies and the high score on every shoot 'em up game south of Dallas to prove it. With her sharp aim, she can shoot down any harmful critters in a flash.

Bessie is the second patient Rashid re-generates. She has come out full of nutty chipmunks in her body. After Rashid removes them and patches Bessie up, she thanks him before taking a brief look around the headquarter's lab. The intercom leads Bessie back into the Re-Generator afterwards, stating that it was a "virtual reality shooting range".

The surgery partner seems to have Re-Generated with a nut-loving critter sticking out of her tummy. He's a cute little fellow, but I don't think he belongs there!

Bessie appears to be a friendly and confident girl. She has an olive skin tone and blonde hair tied in braided pigtails. Atop her head is a red and white cap with a skull logo on the front. She wears a blue and red plaid shirt, accompanied by light blue jeans with a brown belt and black boots. A strap around her body carries one of her blunderbusses, while she carries the other in her hands. Her belt holds her secondary weapon: a bat with a nail in it.

Bashin' Bessie
Add a photo to this gallery

For this surgery you will encounter several chipmunks. You'll meet the first one on Bessie's stomach. To incapacitate the critter, you must shock it with the battery 3 times. You can pull it out from its hole when it's defeated. You can then patch up its hole with two staples, lighter, and gel. A small note: these chipmunks will leave behind nuts to vacuum up whenever they retreat into their hole and when they're defeated.

Besides having the chipmunks to deal with, there's also hidden injuries present inside Bessie's body. In the first incision, there are 3 objects hidden within the stomach area. You can use the scanner to find them. Then when making the second incision into the stomach, there's a "Bear Can" and a "True Grits" canister to extract from the body. Those are the only extra objects present in Bessie's body, the rest is "zap-and-extract". 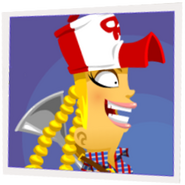 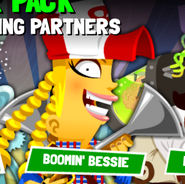 Bessie from Starter Pack
Add a photo to this gallery
Retrieved from "https://amateursurgeon.fandom.com/wiki/Boomin%27_Bessie?oldid=8732"
Community content is available under CC-BY-SA unless otherwise noted.