Buttley Probe Jr., a.k.a "Bradley The Aide", was the aide to the President of that time, Dwayne Pipe.

Sometime in his life, he went to search for his estranged grandfather, Alan Probe. For that, he became the Aide to the President, convincing him to send him to cure his illness, not knowing the President's true identity and plans.

He appears to Alan by disguising his identity as "Bradley", convincing him to realize surgery once again to cure his client. After Alan does cure him (not knowing he was the President), the President forces Bradley to kill him. However, he couldn't bring himself to do it, and reveals his true relationship with Alan. Unfortunately, he gets beaten up for this and has to be operated on. When things were cleared, he apologizes to Alan for hiding the truth. After those events, he helped Alan to revive his old hospitals again.

Wait - this guy is the aide to the president? And he's also my grandson? Can that really be true, or is he just saying that so I'll save him? Only one way to find out for sure!

A man in his 20's, he's shown to be kind-hearted and responsible. He's also nervous and a bit clueless about the things that happen around him.

The main part of his personality, though, is his love and devotion to his grandfather Alan. He admires deeply his skills as a surgeon and couldn't bring himself to harm him, even if that meant risking his own life.

Carefully extract the glass and needles with the tongs. Mend the cuts and burns as normal with the lighter and Pain Away gel. Remember the area of the three burn spots you healed, for you'll be returning to that spot later on. Cut into Bradley and simply use the chainsaw to cut up his liver and replace it with a new one. You'll have to do this again for one of his kidneys as well. When you've finished replacing his organs you'll have one more region to visit: his heavily poisoned heart. There are more burns to gel and heal, then you'll have to cut deeper into his heart.

Lodged inside it are 3 black pellets with skulls on them. Use the lighter to cause them to explode. Be wary for each explosion will damage Bradley, bringing down his vitals with each explosion(Amateur Surgeon 2 only.) After that's taken care of, get rid of the fires with the vacuum and rid the poison with the injector and vacuum(in Amateur Surgeon: Re-Generations you can either suck up the poison or use the pizza cutter to slice open the poison puddle then suck up the rest with the vacuum.) After that patch up the rest of Bradley as normal(gel burns if necessary) and the Aide will be cured.

Note: The heart phase reappears in one of the nightmares of the final level in Amateur Surgeon 4, but with six pellets instead of three.

Pre-op screen of Bradley's surgery in Amateur Surgeon 2. Note that he is unharmed and smiling in this version.

Bradley and Alan breaking the fourth Wall (staring at the screen).

A dialogue sprite of Bradley. 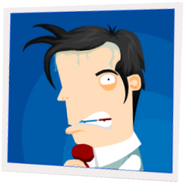