Mike is an entomologist who is very obsessed with studying insects. His exploring usual ends up with him being infested with nasty bugs.

While inspecting a plane crash searching for survivors, Ophelia Payne finds Mike, who is covered in fire-covered mosquitoes. Mike explains that they are eating away at his spine, laying their larvae within him. Ophelia questions him as to why he is not more worried about his current condition, which he simply states that it's not everyday one can meet the larvae state of the rare mosquito.

OBSERVATIONS : I can barely tell where the bugs end and where Mike begins! If I was called "BugBite Ophelia", I'd think twice about any jungle expeditions. The hint's in the name!

Mike's a walking lesson in parasites. This guy's like catnip for bugs! He's BUGNIP! -ALAN

SYMPTOMS: Patient is alarmingly...on fire. I'm not sure whether I'm more concerned by that or the flaming maggots devouring his spine and internal organs

He also described a "burning sensation" when he pees, but I'm not sure that's the maggots. -ALAN

ACTION: Turns out exterminators AND firefighters don't do calls out in the middle of the jungle, so I guess this one's on me...Dammit.

I prepared for this! Your equipment's completely INflammable! YOU'RE WELCOME! -ALAN

Mike makes his debut in Amateur Surgeon Hospital, wearing what appears to be a long sleeved shirt, shorts, a hat, and socks in matching tan, complemented by black shoes. He wears black glasses with white diamonds on its end pieces. His hair is blonde, short, and messy, accompanied by long slightly spiky eyebrows and mustache. A stubble beard covers part of his face. In Amateur Surgeon 3, his clothes appear torn and tattered due to the impact of the plane crash.

Mike comes off as someone who is very obsessed with his hobby. Judging by the reason he had to be operated on in Amateur Surgeon 3, he would be more than willing to risk his life if it meant getting to discover more about a rare insect species. He even expresses guilt when Ophelia had exterminated the fire maggots, which were deliberately destroying his spine.

Inside Mike you'll run into a bug known as the "fire maggot". Use the clamp to hold the maggot in place, then shock it with the car battery. (It can also be shocked without use of the clamp. However this will allow the maggot to retreat inside the body, where it will begin to continuously drain the heart rate unless it is either found with the scanner and cut out or until it does so on its own.) The maggot takes 3 shocks to kill, where it can then be removed. The other task to complete is to remove the damaged parts of the spine with the chainsaw to replace them.

Examples of shocking the maggot with and without the clamp are shown below:

Example of the clamp and shock combo 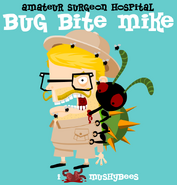 Official art of Mike for AS Hospital

Mike succumbing to the Fire Mosquitoes' immense burning
Add a photo to this gallery
Retrieved from "https://amateursurgeon.fandom.com/wiki/BugBite_Mike?oldid=8258"
Community content is available under CC-BY-SA unless otherwise noted.