As an average looking male just minding his own business, Peter is one day targeted by an unknown presence due to his illegal animal importing.

Hearing the word about the two back alley surgeons, Peter seeks out Alan Probe and Dr. Bleed for help. He explains that while he was trying to feed his pet komodo dragon Mister Caruthers, someone had swapped them with spider eggs, poisoning Peter. After the spider eggs and poison are extracted from Peter, he gladly thanks the surgeons and continues to his daily business.

However that day was cut short, as Peter is once again poisoned. He hears from Trent Coat that Alan and Dr. Bleed are now doing work in the Old Hospital. He hurries over, his skin turning a sickly green as the poison spreads across his body. Vomiting frequently, he pleads for help, afraid that he will die. Alan quickly obliges and operates on Peter once again. It is soon found out that Peter is not only poisoned, but there are also a bunch of bugs living within his body.

After Peter is saved for a second time, he thanks the surgeons once more then warns them about the Crime Boss coming to take care of whoever has been harming the city's criminals. He then flees the hospital, taking Mister Caruthers along with him.

Patient appears to be timid and inoffensive but with a bizarre fixation on dressing his pets up as people. His illegal animal-importing actions appear to have attracted our mystery assailant. The patient has been poisoned with spider eggs that have hatched inside him, which is completely gross.

Open up the patient, then proceed with a standard de-spiderfication.

The spiders didn't work, so our assailant seems to have tried something more drastic to take Peter out...Peter is sick. How sick is he? He dresses his pet lizard up as a dude. That, plus he's chock-full of gross bugs.

If it moves, zap it! Unless that doesn't work, in which case try something else. Hey, how about getting him to eat something that eats bugs? Hmm...Do Komodo Dragons like bugs?

Alan, I think we've been working you too hard...-DR. Bleed

Peter makes an appearance along with Mister Caruthers(renamed the Bearded Dragon Lady) as an aged circus performer. He asks Alan Probe to help enhance Caruthers flame ducts. Alan does so, giving the komodo dragon a makeover in the process. The surgery ended with Mister Caruthers being able to breathe a massive amount of fire, which Peter was very grateful for.

Peter is one of the tamest patients ever encountered throughout the entire series. He's very friendly and considerate, though his fixation on exotic pets can come across as strange to some people. He somehow always ends up with bugs in him during his young days. Caruthers is considered to be his best friend.

In AS1, Peter is fair-skinned with light brown hair, seen wearing a white polo shirt with red suspenders, grey pants, and black shoes. Later on in AS2, his hair thins at the top as it becomes white from old age. His brown glasses are replaced by a plain black pair. His clothing gets an update as well, for he now wears a long-sleeved ruffle shirt and pants that are a matching green. He's noticeably become more ecstatic and outgoing.

Simple enough, just slice open the spider eggs then cut out and suck out the poison.

Clear the eggs and poison from his stomach, then cut into him deeper to clear more eggs and poison. However it's not the end quite yet. Use the etchy sketchy(scanner in AS4's case) to find various bug nests throughout the region. Tap it with the pizza cutter to expose it then zap it with the car battery 3 times to force the bug out to zap. You'll have to search and zap for two more times while curing poison in the process.

Peter: Surgeons! You have to help! I've been poisoned!

Alan: Poisoned? I knew it! Did someone attack you? WHAT THE HECK IS THAT?!

Peter: Oh, you mean Mister Caruthers? He is my pet komodo dragon and my good friend!

Peter: Today he would not eat his caviar, so i said "Mister Caruthers! You must eat your caviar! Look! it is delicious - nom nom nom!"

Peter: And I ate some to show him, but someone had swapped it for spider eggs! Now I am going to die... Of spiders!

Peter: That was very scary! Thank you both!

Alan: You know doc, I've seen something similar to that before!

Alan: Back at the warehouse a guy came in full of bugs! He almost seemed to like it! I fixed him, but...

Bleed: You performed surgery without me? Alan! That was madness!

Peter: Doctors! The weird guy in the trenchcoat in the alley said you'd be here!

Peter: Ugh... Thank you! I don't know what happened!

Alan: Peter, have you seen a girl around here?

Peter: A girl? No - but I heard the city's crime boss is plenty mad about what's been happening to everyone!

Peter: He's on his way! I have to get out of here! Mister Caruthers will get nervous!

Peter: And when he's nervous, he gets gassy and aggresive, in that order!

Alan: What is THAT!

Peter: This is magnificent Bearded (dragon) Lady! Her name is Mister Caruthers.

Peter: But something has gone wrong! She can't make fire!

Peter: Who heard of a bearded dragon lady that can't make fire?!

Peter: Well perhaps you could take a look at her flame ducts? She is due to go onstage very soon!

Alan: Wait, which end are the flames meant to come out?

Alan: Because there are a couple of options and I am NOT COOL with one of them...

Peter: Oh me! This is wonderful!

Bradley: Is it just me, or does that lizard look traumatized?

Alan: Traumatized by how COOL he is.

Bradley: Yes. Fair enough. I would totally pay to see this act.

Peter and his cheesy explanation

Peter and Caruthers in the future

Bradley would totally pay to see this act.

Peter's appearance in the PM story

comparison of young and old Peter

small pic of him being cut open in AS Hospital 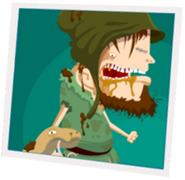 Petyr Ye Bugge-eater (Through the Ages Blood Cup)
Add a photo to this gallery
Retrieved from "https://amateursurgeon.fandom.com/wiki/Bugeater_Peter?oldid=9045"
Community content is available under CC-BY-SA unless otherwise noted.