Bump is a well known mechanic within Robotopia, owner of the Let-Your-Junk-Hang-Out. He's a trusted friend of Reverend Apocalypse's, who had wedded him to his lovely tractor wife.

Sometime while running his shop, Hubris D'Obscene had come in and questioned him about the Reverend and his church. Unhappy with his answers, he knocks out and kidnaps Bumps, confining him in the Dungeon Spa of the Exile Clinic. Swiping his clothes, Hubris ties him to a chair and brutally beats him, leaving nasty gashes and snapping his leg. Injecting him with the ice ant serum, Hubris leaves Bumps to die.

Fortunately, Ophelia Payne is able to rescue him when sent to investigate the Exile Clinic, where he then tells her everything he had experienced with Hubris. Ophelia then leaves him to warm up and heal. He is later able to return to Robotopia safely.

Observations: Urgh...I've seen some pretty nasty stuff throughout this whole adventure, but this poor guy...I think I'm going to be sick!

This is fairly brutal...unlike our other patients, this doesn't look like an accident... -ALAN

Symptoms: Whoever he is, he's been brutally beaten and left to death by ice ants. Was the ball gag really necessary? It adds a really uncomfortable vibe to all this...

Best never to question a good ball gag. The answers you get are muffled anyway. -ALAN

Action: I'm not sure that leg is salvageable - once we've dealt with the ice ants, we'll probably need to sort him out with a transplant. If we act fast, we can save him...

Something about this guy's really familiar... -ALAN

Despite Ophelia's mention of ice ants, there are actually none present throughout the surgery, it's only their frostbite that remains. Use the lighter to melt the frostbite then fix up the wounds on Bumps. You'll then have to make an incision on one of his legs. Fasten the clamps onto his burst arteries, using the lighter and gel to heal the artery. After fixing up remaining wounds, use the chainsaw to cut off the leg bone to replace it with a new one. Moving on to the other leg, saw off the beat leg and plop on the fresh one. However you'll have to attach the opposing arteries together. Carefully clamp the arteries and fasten them to stop the blood from spewing. Then carefully use the tongs to put together the opposing arteries along with the broken leg bone(this was made much easier in Amateur Surgeon:Re-Generations).

After the bone and arteries are mended, you'll proceed to his liver. Depending on your timing with the pizza cutter, Ophelia may or may not be stunned through the transition by the frostbite(AS3 only). Melt the frostbite then heal up the wounds. After that's done you'll head into the final area, where 3 burst arteries are present within his heart. Clamp and fasten them then heal the arteries and everything else as normal. 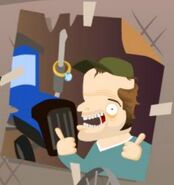 Photo of Bumps and his wife

A mention of Bumps from the Rev's dropped brochure
Add a photo to this gallery
Retrieved from "https://amateursurgeon.fandom.com/wiki/Bumps_Grinder?oldid=9128"
Community content is available under CC-BY-SA unless otherwise noted.