Pirates - the scourge of the seas and internet alike. I spliced a main-brace once; my trousers fell down and the wind made my timbers shiver. Then all the nurses screamed and I had to go back to my room. Good times.

There are leaches (needs confirmation) on his chest. You must burn the eye on Re-Generations you must deal with the poison they leave behind. Their bodies will need to be removed with the Tongs. Then you cut to his heart. Tentacles can be seen poking out. Went cutting into the heart the main challenge will begin for there is live squid. When it opens its mouth you need to shock it with the car battery. When stunned cut a tentacle with the chainsaw. In the original ink will blast out after cutting an tentacle and when killing the squid, this is absent in Re-Generations. It is advised to inject him every time you deal with a tentacle. After you took care of squid and clean up then you can remove the tentacle in his heart. Once done the surgery is easy for all that is left is to seal, cauterize, and apply pain away gel on the wounds. 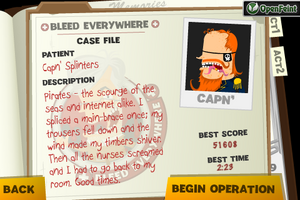 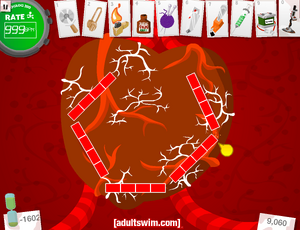 The glitch, as it appers in a hacked version of the game
Community content is available under CC-BY-SA unless otherwise noted.
Advertisement