Not much information is given about the Crime Boss. However, he appears to have a heavy, intimidating influence over the city.

Word got out that the Boss's criminals were being harmed by a certain assailant. Therefore he decided to take matters into his own hands and kill the assailant. However as he was traveling down to the city along with his henchman Ivan, the said assailant thought ahead and sabotaged the brakes, causing the car to crash right into a sewage farm.

Ivan carries the boss and hurries over to the Old Hospital. He encounters Alan Probe and Dr. Bleed and requests help.

The Crime Boss and his aptly named lackey Ivan Henchman were on their way to apply some old-school justice to the person hurting their criminal friends, but they crashed on the way. The steering wheel's connected to the head-bone, the shoulder-bone's connected to the license plate, none of the other bones are in the right place and everything is covered in leeches from the sewage farm. Ugh.

Whatever needs to be done, do it fast and make sure they both survive! These two are very, very bad men!

For the boss extract the various objects lodged within the Boss and fix up the various cuts. To kill the leeches, burn them with the lighter then pull them off with the tongs(in AS1 you must also remove the leeches' teeth.) Mend the puncture wounds then replace the lungs.

The Boss in the arms of Ivan Henchman 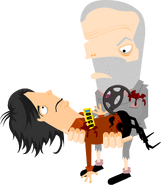 Unused slightly altered pose of the Boss with Ivan
Add a photo to this gallery
Retrieved from "https://amateursurgeon.fandom.com/wiki/Crime_Boss?oldid=8024"
Community content is available under CC-BY-SA unless otherwise noted.