Start a Wiki
Crumpet Murphy is a character who originally comes from Mediatonic's Amateur Ninja. He makes his first appearance in the Amateur Surgeon universe in Amateur Surgeon Hospital, where he could be hired as part of Alan's staff. He then becomes an active partner in both Amateur Surgeon 3: Tag Tea Trauma and Amateur Surgeon 4: Re-Generations. He's the fourth patient (P4) Dr. Rashid has to help in his storyline.

Crumpet Murphy is rumored to be a ninja grandmaster under the guise of a janitor. He had aided Willow Stiletto in her quest at bringing down Megacorp to rescue her fellow ninjas. After the adventure, Crumpet has appeared as a helpful partner for Alan Probe and friends, making heavy use of his "Janitor-Jitsu".

Crumpet makes a return as an unlockable partner. He has no major role in the story, but he'll appear in cutscenes alongside Ophelia Payne if he is chosen as the current partner.

Crumpets is re-generated from the Re-Generator as Rashid's next glitched patient, his broom and other janitorial items lodged in his body. After he's patched up, he will get up and question his surroundings, complaining that the room is a mess. He's lifted up by the intercom's metal claw and returned to the Re-Generator, but not before exclaiming the final words "Wait! No! I just want to cleeeean!"

The computer said this old man was some sort of martial arts grandmaster, but he's come out impaled on a broom! More like a master of splinters!

You'll have to venture through two deep areas in Crumpet's body. You can clear up poison with the syringe or you can slice-and-vacuum. In the first area, there's an aerosol spray and a plunger to extract. When you patch up the cut that's next to the aerosol spray, it'll set on fire, so prepare to use the vacuum. When slicing deeper into the second area, clear up poison and extract the plungers. After patching up burns and cuts, saw off part of the broom's handle as directed. As you work your way back out the body, you'll be able to saw off more parts of the broom, which afterwards you can remove the rest of it from Crumpet's chest. 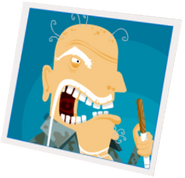 File photo
Add a photo to this gallery
Retrieved from "https://amateursurgeon.fandom.com/wiki/Crumpet_Murphy?oldid=8883"
Community content is available under CC-BY-SA unless otherwise noted.