Dick is a seemingly average office worker with a terrible case of cracked bones.

Dick comes to Alan Probe in the bathroom in hopes to cure his crippling bone disease. He gets as he wishes, Alan replacing his bones with random metal left lying around. He warns Dick that he will die if he comes into contact with any electrical equipment, but he takes this as a joke and leaves, calling Alan a "kidder".

Ah...here we go! Back to good ol' patients with good ol' crazy diseases. Dick here has bones so brittle it's like his body is being supported by matchsticks.

I'll need to cut out the dead wood and get some good ol' improvised implants in place!

Dick is shown wearing a light-blue striped shirt with a polka dot tie and suspenders, grey pants, and plain shoes. His hair is light brown, swept back at medium length. Dick holds his mobile phone in his hand most of the time, even during surgery.

Dick is grinning for most of his screen time, his demeanor quite easy going (though he can seem oblivious to evident hazards).

All you must do is carefully use the chainsaw to remove the cracked bones and replace them. Extract the small pieces of bones lodged in him and fix the cuts when necessary and you're good to go. 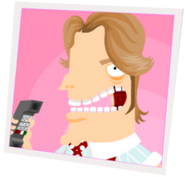