In his teens, he applied for a job in a pizza company named Eat'cha Pizza! where he got hired as a pizza delivery boy. It's implied he comes from a very poor family.

As a 19-year-old teen, during one of his rounds, a drunk man walked right in front of him, causing Alan to scream and crush the man's ribcage. The man was none other than Dr. Bleed. After saving Bleed with his help, Bleed started teaching him about surgery, and they gradually form a strong father-son relationship. They went to a warehouse to continue Alan's study in surgery. While alone in the warehouse, a shady character named Horrace D'Obscene asked Alan to operate on him; and then meets Aureola, liking her immediately. After a series of unfortunate events; Alan found out that Horrace, in fact Dwayne Pipe, has been causing the attacks. After Alan operated Aureola, Bleed, and Dwayne; he sent Dwayne to prison and married Aureola, living happily ever after.

Ten years later, at 29 years old, Alan is a world-famous surgeon. While Alan was flying through the night sky, he saw a sled being pulled by flying creatures causing him to scream and crash into the sled and crash on the ground. While cursing the man who he crashed into, he saw an elf in the tree. Seeing that the elf was badly injured, he rushed over to a secure area and began operating with strange tools. The elf, who is named Generic, turns out to be a lot of help to find Santa Claus, the man he crashed into.

In this Facebook application, the player helps Alan manage his hospital.

Alan acts as a mentor to the amateur surgeon Ophelia Payne. In most ways, he's the equivalent to Bleed in the original game. And like him, Alan eventually will become a patient the player has to save in the Exile Clinic after he's been poisoned.

OBSERVATIONS: I always found them thoroughly useless and distracting before, but I miss Alan's annotations...

SYMPTOMS: Geez, look at the SIZE of that syringe dart sticking out of him! I don't know what to expect, but I better cut him open and find out FAST.

ACTION: Whatever poison Hubris infected him with hasn't doesn't seem to have taken full effect yet. This isn't going to be easy, but c'mon Alan - we can get through this...

51 years after the original Amateur Surgeon, Alan, who is now 70 years old, has been sent to a nursing home for 30 years after his hospital got closed; and made him not to contact with his wife and family. When he was playing chess out of boredom a strange character appeared to offer Alan to do surgery again. Alan soon knows that "The Aide" Bradley works for the president and is his grandson. Afterwards, he knows that the President is his old-time enemy, Dwayne Pipe. After the second arresting of Dwayne, Alan reunited with his wife Aureola and his children and with the help of Bradley opened all of the Bleed Everywhere hospitals.

After those events, he decides to try and revive his mentor, Dr. Bleed. When he does, he gets berated by him for doing such a thing, but he also makes it clear he's proud of him. Although Alan bids farewell to him with a smile, after Bleed leaves he breaks down crying, missing his mentor but also happy for having his loved ones (Aureola, Bradley, etc.) back.

​​At some point in time 10 years ago, he suffered a major wrongdoing under Ophelia's hands, leading to his crippling dementia. Forced to retire from Improvised Surgery, he has no choice but to reside in a nursing home. Ophelia Payne, being filled with regret, made a clone of her late granduncle, Dr. Ignacious Bleed II to assist her on her quest. As she preserved part of Alan's brain for the Memotron, she uses it to implant the memories of her mentor into Ignacious. As they went to the retirement home, Alan's revealed to be in a far worse state than she realizes. After the operation, he regains his former self, stating "We have a lot of work to do." After restoring him, Ophelia, Alan and Ignacious went out to tie up loose ends, leaving Dr. Rashid behind to fix up the remaining partners.

Alan is... much diminished from the man I imagined. He's suffered a terrible wrong at Ophelia's hands. Repairing his brain appears to be triggering some extraordinary flashbacks. This is like nothing I've seen before!

-Save the man who has saved so many...

Alan goes along with Ignacious II on vacation to Lunacy Falls. Though Ignacious only wishes to relax, Alan yearns for more patients to perform surgery on. He soon gets what he wishes for as numerous mishaps begin to take place during their stay. After breaking into their own cabin since Alan had lost the key, the surgeons soon make contact with a strange blue plant, which was blocking Alan's way to the bathroom. Afterwards, as the story goes on, Alan and Ignacious run into a vast majority of patients. At one point, Alan even becomes a patient himself since he got bugs up his coat and had accidentally swallowed his hook out of fright.

Later, after operating on a strange blue boar, the guys are approached by a mysterious butler, Tremblay. Believing that they were partygoers for the Master's party, he leads them to the Maison D'Obscene. There Alan and Ignacious meet three injured fellow partygoers, who when healed, are revealed to be undercover detectives, their names being Gaffney Brake, Selma Blinkley, and Ruby (a.k.a. Dale Break). Soon when the power goes out, the gang begin to grow suspicious of the Master's whereabouts and true intentions, so Alan and gang decide to investigate the mansion.

After putting together a peculiar contraption, they gain access to a hidden lab, where they find a blue infected Karl in a shark costume. After curing him, Alan hears Ophelia's call for help from Ignacious' Mobitron. Taking a secret passage, they make haste and return to their cabin, where they find Ophelia infected as well, Tremblay right behind her. Highly suspicious of the butler, Alan becomes angry and yells at Tremblay to step away from her. However Ignacious calms him, stating that they should be more worried about Ophelia's well being than pointing fingers. Alan takes word of this and gets to work with helping cure Ophelia.

After wrangling a huge catfish out of Ophelia's body, Alan and gang surround Tremblay so then he is unable to exit the cabin. They soon come to realize that his face is actually a mask atop several other masks (and a grocery bag). After a whole bunch of unmasking, Tremblay is actually revealed to be Bluebris, which the gang takes along with them back to the main lab.

A-ha! The fabled Alan Probe, master of improvised surgery, struck down by a swarm of insects mid-gloat. I suppose I should stop writing this and help him before he chokes to death on his line!

In Amateur Surgeon, he is a young teenager who works as a pizza delivery boy, but he always dreamed to become a famous surgeon. He is extremely clumsy and sometimes irresponsible as a consequence, as well as having a massive ego. He also tends to say inconsiderate comments on patients. Despite that, he's kind and selfless, working hard to become a famous surgeon, and is exceptionally good at it.

In Amateur Surgeon 2, he changes his personality due to his age and circumstances: He is more intelligent, and less clumsy; but also more cynical, suffering from a bad case of self-loathing, who tries to cover with his ego. However, he's the same Alan at heart, retaining his kindness and goofiness, even being a little childish at times. He also tends to forget and confuse things, due to his old age.

In fact, Alan, despite his flaws, is ultimately a caring and good-natured person who will do everything for his patients, no matter what risks he has to take.

There is frostbite present at the start of the surgery which can be removed with the lighter. To get rid of all poison, use either the syringe or the cut-and-vacuum tactic. When heading into Alan, there are tiny newborn dart frogs, protected by water bubbles. Using the lighter on it will cause them to pop, allowing the frogs to hop about. With a steady aim, zap various frogs with the car battery then finish them off with the lighter as they flicker green(as of Amateur Surgeon 4 there is no longer a need for the lighter, for a simple shot with the car battery will instantly kill the tiny frogs. It's even possible to simply extract the frogs while they are still in their bubble, making it where you do not have to fight them at all).

After dealing with any frostbite and poison, you'll cut even further into Alan's stomach. Residing there is the boss, a huge black frog with a blue skull on its back. The only tool you'll need in order to damage it is the lighter. An indication that it is getting weaker is when it leaves behind a bunch of tiny frogs to be dealt with, where it will then retreat off-screen. A caution when fighting this boss is to not allow the tiny frogs to build up within Alan, for the more frogs bouncing around, the quicker Alan's heart rate will drop. Be sure to kill them off along with extracting poison as well. The boss frog takes a total of 3 hits to kill and remove.

Chainsaw the top part of his skull, vacuum the blood and remove it to reveal the Brain Creature's tentacles, then remember this color chart similar to that of the Super Bug from Dr. Ignacious Bleed II:

​​Using this method, use the tools necessary for each tentacle and remove them with the chainsaw. Next, we see the Brain Creature and follow the method up above. After that has happened, the Creature turns white and teleports the player to one of Alan's nightmares, then back to the creature once done with said nightmare.

Zap the purple critters with the battery before they hop offscreen. When they're extracted, you'll move onto the head. Zap the single critter, pull out the hook from Alan's mouth with the tongs, and extract the broken shards from Alan's sunglasses.

When finished, the body is next. Extract the hook. You'll notice that there's a strange bluish flame that has to be vacuumed up, however be aware that there's a huge dragonfly causing these flames, and will make more as it flies by Alan's body. The pattern for the dragonfly is similar to the President's killer wasp from Amateur Surgeon 2, for it will fly across the body a few times before landing for a few seconds, leaving it open for the zapping. After 3 zaps the creature will splat dead for extraction. The dragonfly boss is the final part of this surgery.

Alan a bit distracted while driving

Alan about to crash into Dr. Bleed

Alan's appearance in AS3

A very poor photo of Alan taken by Bradley

A bit of a better taken photo

Alan's appearance in AS4

Alan from the Christmas Edition

Alan Probe in the AS2 timeline, as seen in AS4

Alan from the AS2 trailer 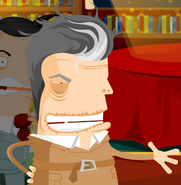 An example of the normal pose

Alan's outfit in the epilogue 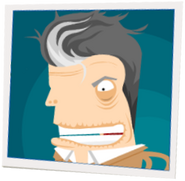 Alan Probe appears as a part of the Adult Swim Skin Pack in Pocket God
Community content is available under CC-BY-SA unless otherwise noted.
Advertisement