Dr. Rashid "Rash" Scratch is a side character and the 14th patient from Amateur Surgeon 4: Re-Generations. He is currently the head and supposedly the only member of the newly put together Field Hospital.

Sometime during his life, Rashid took an opportunity to become an improvised surgeon. Under the supervision of Ophelia Payne, he joins the Field Hospital to learn the techniques of Improvised Surgery bit by bit.

Dr. Rashid is first introduced as a patient in the game. He runs into Ignacious Bleed II as he was seeking his boss for help. Somehow he had gotten his tools stuck in all the wrong places: the injector in his severed finger, the vacuum lodged in his stomach, staples stapled all over him, etc. After Ignacious helps him remove all the tools out of his body, Rashid introduces himself and tells him about the Field Hospital. So far he is the only member but him and his boss hope to make it grow, starting with Ignacious himself.

After the operation, Rashid is seen residing in the Field Hospital, introducing each of the various events currently available. He also reminds the player when tools or partners are ready to upgrade, as well as small reminders to visit the Field Hospital once in a while. Rashid also has a small side story of his own, where Ophelia has given him the task of operating on various partners who have come out all wrong due to a glitch in the re-generator.

The patient is currently functioning as a pincushion for his own improvised surgical tools. Extraction should be fairly straightforward - it's the educating that might take time.

Dr. Rashid is a chubby, dark skinned man with dark brown spiky hair, huge bushy eyebrows and a comb-shaped mustache. Slightly covered in blood, he wears a white surgeon's uniform with a cap, green pants with brown stripes, blue gloves and tan shoes. In certain shots his pink socks are exposed, usually when he is shown in mini form. He also wears a surgical mask and is instead covered in green goop.

Rashid is very lively and positive, always happy to assist Ignacious and the various patients of the Field Hospital, even if it can get a little too bizarre for him at times. He's shown to have a polite tone, usually addressing others as "Mr" and "Ms". Sometimes Rashid can be somewhat clumsy, nervous and a bit of a dunce, hence why Ignacious had to operate on him. He's also shown to be an honest person and therefore has trouble lying, as shown when Ophelia questioned if he had been playing dating simulators on the Re-Generator's terminal, to which he responds, "Um...possibly yes? I haven't not been doing that." It's highly possible he had lost one of his fingers during some type of accident. Rashid really enjoys tea as a beverage, occasionally pushing around a beverage trolley.

Rashid seems to have developed a close friendly relationship with Ignacious. At some moments during Rashid's side story, he receives letters that Ignacious has sent him, full of his experience outside the lab. Rashid very much respects Ignacious, but can't help but feel a little jealous of him at times. He hopes to someday have his day to shine just like his fellow colleague. As well as this he also appears to feel quite lonely, which led to him playing dating sims and ordering a life partner from Robotopia while he was left in the lab by himself.

As Ignacious implies, the surgery is pretty straightforward. Extract the tongs and pizza cutter from Rashid's body then carefully remove the staples by lifting them with the tongs. Use the Pain Away gel to heal all the staple wounds and fix other cuts. After that's finished you'll have to cut into Rashid. Use the syringe or the pizza cutter and vacuum tactic to remove all the poison then use the scanner to locate and cut out three hidden syringes within his body. After fixing up the area you'll be able to move on to the final region of his body, where a blown up vacuum is waiting. Suck up all the fire and simply lift the vacuum with the tongs and you're done.

Rashid without staples visible in his pre-op

Example of Rashid introducing an event 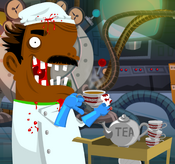 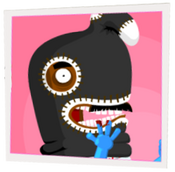 File photo for "Grandmaster" Scratch in Pagoda of Pain

A scene that appears endgame when the Blood Bank is full

Rashid in a special page for connecting with the Cloud 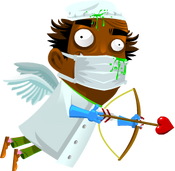 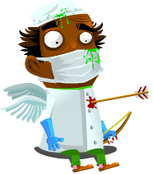 Cupid Rashid shot in the heart
Add a photo to this gallery
Retrieved from "https://amateursurgeon.fandom.com/wiki/Dr._Rashid?oldid=8830"
Community content is available under CC-BY-SA unless otherwise noted.