Earnest was a prisoner from Shanks-A-Lot Prison. He now seems to travel around with fellow fugitive and boss, Animal the Cannibal. He holds quite the criminal record with all the trouble he's caused.

Earnest is an inmate seen many times throughout Ophelia's trek around Shanks-A-Lot Prison. He is responsible for injuring the guards warding the prison in numerous ways, such as shanking Dale with a toothbrush, strangling Ed with a wire, and nearly suffocating Neil by stuffing him inside a cement mixer. He asks Ophelia to fix them up, claiming that they are his "best friend guards", preferring to keep them alive.

Soon however all the "guards" take revenge on him by surrounding and beating him to a pulp, leaving him a bloodied mess in the Warden's Tower. Ophelia locates and operates on him, fixing his broken bones in the process. Grateful for her help, he hopes that she will remain as Alan's student in hope of meeting her again.

Which poor soul has Earnest attacke- oh wow! It IS Earnest! ...I think! It's hard to tell with all the gross everywhere!

Pretty tough to tell where the gross ends and Earnest begins! -ALAN

It's like each guard took revenge according to how they were attacked...It's kind of poetic, in a messy, awful way.

We just call it "having the crap beaten out of you!" -ALAN

Start with the contusions - no! The compound fractures! No! Argh! I don't even have medical terms for all this!

Dr. Ignacious Bleed II meets Earnest while searching for a way out of Guru Mountain. Frantically seeking help, Earnest explains that he has been cursed after supposedly killing the original medicine man in order to take his place. Ignacious agrees to investigate the issue and successfully cures Earnest by spreading Pain Away on the affected parts of his body. Finding a voodoo doll inside Earnest's stomach, he removes it and replaces it with a tasty gingerbread man. With Earnest rid of the terrible voodoo curse, he thanks Ignacious and informs him that his boss may know of a way out the jungle.

This rather powerfully accented fellow appears to be suffering from some kind of mysterious illness. There's a strange, overbearing sense of occult in the air. I wonder...

In Amateur Surgeon 3, Earnest appears as a light skinned, portly man wearing a black and white striped prison uniform. His little cap on his head matches this uniform. His hair, bushy eyebrows, and huge beard are dark in color. In Amateur Surgeon 4, his now white hair has thinned at the top and he wears a tattered tank top, shorts, and sandals. He's even grown body hair on his arms.

Despite being much older, Earnest's trouble-making tendencies have remained unchanged. He's almost never seen without having harmed someone. He usually does it for the fun of it, though he also resorts to "shanking" if the victim refuses to give him what he wants. He's quite strong as well, being able to incapacitate the "guards" from Amateur Surgeon 3 while handcuffed. Though Earnest exhibits such violent and unpredictable behavior, he still has a heart and cares for those he considers his friends. Ever since Amateur Surgeon 3, he and Animal appear to be on good terms with each other.

Earnest is basically a mixture of the guards' surgeries. Patch up various wounds while using the chainsaw to remove cement blocks. You'll have to cut into him and replace some of his rib bones. Then you'll have to extract a bunch of items from the currently broken leg. Proceeding to his leg bone, simply chainsaw and replace. Then all that's left is to patch up his other leg, using the chainsaw as needed.

Simply use the Pain Away gel to relax the various wobbly parts of Earnest's body. For the voodoo doll, extract the needle pins with the tongs then use the chainsaw to remove it, replacing it with a gingerbread man.

Ignacious encountering Earnest and his dilemma

Earnest from the Pocket Morty crossover storyline, exhibiting a bit of animosity after being caught cheating 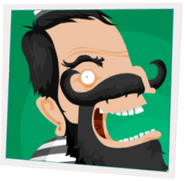 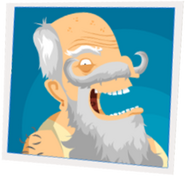 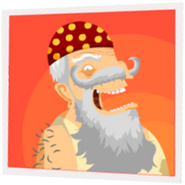 File photo (Scurvy Swashbucklers)
Add a photo to this gallery
Retrieved from "https://amateursurgeon.fandom.com/wiki/Earnest_Pickles?oldid=8252"
Community content is available under CC-BY-SA unless otherwise noted.