Eddy is a scruffy looking male who somehow gained unusual dog-like behavior. At some point he had been arrested for some sort of crime. The police had fitted Eddy with tracking chips inside him rigged to an explosive collar.

Through spread of word, Eddy goes to surgeons Alan Probe and Ignacious Bleed to have his tracking collar removed, along with the electronic chips inside his body. After the surgery, he suggests that the boys move into the city for more business, but Bleed immediately rejects the offer, much to young Alan's dismay.

Despite that, the surgeons head into the city later on after Bleed's prolonged contemplation. Throughout their time in the back alley, they are surprised by Eddy, who has run up to them in a panicked matter. Heavily injured, he sputters out that someone had sent a dog after him. Alan quickly sets off to save the dying Eddy.

Patient displays a high number of "doggy" attributes, such as elongated canines and a predilection for inappropriate sniffing. Subject complains of several tracking devices located in his body, connected to an explosive collar. Remove the tracking devices, disarm collar, neuter and scratch behind ears.

Eddy is back! But this time he's been set upon by some of his furry canine brothers, presumably whipped into a frenzy by our assailant. Patient has had a large chunk of flesh ripped out of his side, with further complications. Close up his wounds and de-flea him. Also, it's probably a good idea to keep some extra organs handy, for transplants and maybe as a treat for being a good boy.

Eddy is light-skinned with dark, spiky hair and a gray stubble. He possesses four sharp teeth and a long tongue, similar to a dog's. He wears a green hoodie, which has a white frill on its hood. His pants match his hoodie. His socks and shoes add to his attire with black and white. He appears to have an ankle bracelet around his leg. Eddy had previously worn a black collar around his neck, which was connected with a flashing green device. This was later removed by Alan.

Eddy, though appearing rough and troublesome, can actually be quite friendly. As seen throughout the game, he has the habit of behaving like a dog. Such examples include sniffing his surroundings or growling at those who bother him. He also always leaves his tongue out.

You'll have to make an incision into Eddy's kidneys. To find the tracking chips, use the etchy-sketchy(in AS4 have no worries, the chips are already exposed.) Use the lighter to destroy the chips, extinguishing fires with the vacuum in the process. Be sure to extract leftover metal as well. You'll have to do the same procedure for his lungs, then you will be able to remove his collar with the chainsaw.

Remove various poisons with the slice-and-vacuum tactic. If you're playing the original Amateur Surgeon, each of the huge flesh wounds take a single staple down the middle to close. Otherwise, you'll just have normal large cuts to take care of in AS4:RG. After patching up the large and small cuts on Eddy's body, you'll have to make an incision into his kidneys for the second time. This time, there is a bunch of poison that must be sliced and sucked up, along with replacing a damaged kidney with the chainsaw.

The time limit for this surgery has been reduced in AS4:RG, so be sure to work quickly but efficiently.

Eddy: *sniff sniff* Are you the vet? I mean, surgeon?

Eddy: I'm Eddy the Dog. Know why they call me that?

Alan: You clean yourself with your tongue?

Eddy: What? No! *growl* I'm full of tracking chips and the police make me wear this collar!

Alan: We can remove those for you. Up on the table!

Eddy: Oh man, thanks! You know, have you guys ever considered going upscale? Maybe moving to the city?

Bleed: Oh no! I much prefer the quiet life!

Alan: But doc! think what we could do! There'd be loads more interesting stuff in the city!

Bleed: Alan - you are a very talented young man. In fact, you remind me of a student I once had...

Alan: Really? You mentioned a student before! What happened to him?

Bleed: Never mind! Listen to me Alan - you said you wanted my help. Fine, I will help you.

Bleed: But all I want is a quiet life! Out of the way! Is that clear?

Alan: He'll pull through, but that was attempted murder!

Bleed: I... I will explain what I can, Alan. But for now... It looks like we have another patient.

Another example of Eddy's canine traits

2nd encounter with a dying Eddy 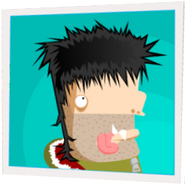 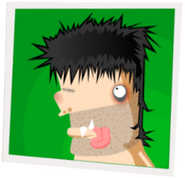 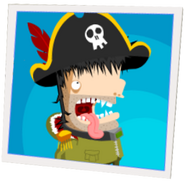