Presumably a young male in his teens, Emo Shun is a depressed clown seeking ways to further alleviate his angst issue.

Emo Shun originally came to Alan Probe because he had simply become bored with dressing as a clown.

Emo Shun makes his way to one of Alan's Bleed Everywhere hospitals to attend his therapy session, where he meets Dr. Alan Probe and Ophelia Payne. Unintentionally frightening Alan with his clown make-up, he explains that he has only dressed this way as a means to cope with his bottled up angst. Rather than go through with an average therapy session, Alan suggests that Ophelia perform a lobotomy.

After doing so, along with replacing his heart as well, Emo is shown to be much happier. Now present with his hair brushed back and clean of his clown make-up, Emo thanks the surgeons, however his speech is a bit impaired due to the lobotomy. Whether the effect was permanent or not is unknown.

OBSERVATIONS: An angst-filled clown who needs to have his "frown turned upside-down". Is there a medical procedure for this?

SYMPTOMS: The main one is depression, and he's tried to self medicate by dressing like a clown.

ACTION: Traditionally it would be therapy with POSSIBLE mild electroshock...But I'm guessing we'll go with surgery?

(If he's not happy after having a chainsaw in his brain, he probably never will be! -ALAN)

Slice into his head and extract all the foreign objects, then cure the black poison and patch up as normal. Now you'll have to use the chainsaw to cut out Emo's sad face, that way you'll be able to replace it with a happier one. The last area to visit is his pure dark heart. Extract the sad faces and cure more poison, then patch up the cuts so you can go on and replace his heart. Then Emo will be emo no longer!

An easy way to cure depression...

...replace your sad face with a happy one. 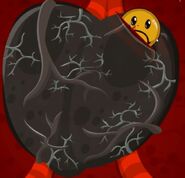 Which gets replaced by a colorful rainbow heart