Faker Hubris(also known simply as Blue Hubris or Bluebris) is the 15th patient from Amateur Surgeon 4: Re-Generations. He later reappears in the Epilogue as a minor antagonist. He is a fellow clone of Hubris D'Obscene.

A clone created by Hubris D'Obscene, Bluebris was contained in one of the vaults in the lab, kept in cryogenic slumber.

While exploring the lab, Dr. Ignacious Bleed II is led to a group of nearby stasis chambers by the voice on the intercom. Before Ignacious has a chance to speak, he is suddenly startled by a blue man in a hospital gown who had seemingly come out of nowhere. The voice explains that the man is a clone of the infamous mastermind Hubris D'Obscene and that she plans to gain information from him on the true Hubris's whereabouts. Since he had recently been released from his chamber, Bluebris's various organs had become half-frozen. Besides not being able to throw a proper insult at Ignacious, he was unable to release the info due to his frozen brain.

After Ignacious is able to thaw the clone's chilled body, he regains his intellect and informs him that Hubris had ventured to Guru Mountain in order to find a cure for the "Clone Sickness".

The recently defrosted patient appears to be a clone of a notorious villain! However, he has information we need - and judging from his witticisms, we'll need to seriously warm up his faculties first.

Instead of following his creator's footsteps in vengeance, he decided to go for a more normal life. However when attempting to apply for a job, he would always be rejected. Therefore he decided to give the world a taste of how it felt to be "him" by creating "the Blutation". Traveling to Lunacy Falls, he harvests the rare coffee bean and creates the "coffee virus".

Disguising himself as "Tremblay the Butler", his intention was to give everyone a sip of the coffee, where he would witness everyone's skin turn blue. He was unaware of the harmful mutating afterward, that is until he realized Karl had hopped into the vat full of the blutating coffee. After he is unmasked by the end of the Epilogue, he's requested by Ophelia to come with her, Ignacious, and Alan. He does so without further denial.

Bluebris appears to be a toned down version of Hubris when it comes to personality. He seemed to have a moral good side to him, but this was covered with resent due to the fact he was always rejected from landing a job. In his first appearance, he simply wore a medical gown and the trademark D'Obscene hat. When disguised as Tremblay, he wore a casual butler's suit. His blue skin seems to be a permanent trait, most likely due to an error during the cloning process or because he was kept in cryogenic slumber for an overextended period of time.

Use the lighter to melt the ice present throughout Faker's body. You'll also encounter fleas when traveling to his intestine and kidneys. However they are trapped in ice cubes, so you'll have to melt the cubes with the lighter first in order to free the fleas. Then zap the pests with the car battery as they land from their hop. The only other task you'll have to handle is extracting the multiple ice shards lodged in his heart with the tongs.

The 3 areas can be ventured into in any order(just as long as you've melted all the ice from outside his body.) Using partners Iron Wang and Chad Burnem will instantly melt all ice within an area, excluding ice shards.

Use the tongs to grab the zipper of the Tremblay mask and extract the split parts of the face. This will reveal a spooky watermelon. Extinguish the eye flames with the vacuum, then saw the melon in half for removal. This will leave behind a bunch of seeds for suckage. Use the cutter to slice off the bandages. On the way you'll encounter little scorpions that'd like to have a conversation with your chainsaw. Keep sawing them until they are eradicated into poison.

When all bandages are removed, use the lighter to burn off the hairy mask, then vacuum up the burst flames to reveal the next mask. Extract the goofy glasses and hair, then saw off the ears and slice off the middle of the mask when directed. After exposing the mysterious metal skull mask, chainsaw its jewel eye off and suck up its debris. This will reveal a gear, which you can use the clamp on to open the other eye. Saw and vacuum like before, then zap the exposed battery within the eye socket. This will pop open the skull, leaving behind its pieces for extraction and a few fires to extinguish.

After you've taken care of everything, you can finally remove the last mask: a paper grocery bag. Simply lift it up and remove it with the tongs and Bluebris shall be revealed!

But it seems his brain is a bit defunct 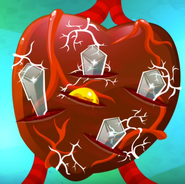 Puts a new meaning to a "frozen heart"

With returned intellect, he is able to release info

Bluebris peeking from the President's portrait in the Epilogue

"And I would've gotten away with it too.."

Unmasked in the final surgery of the Epilogue

Bluebris with Alan, Ophelia, and Ignacious in the ending of the Epilogue 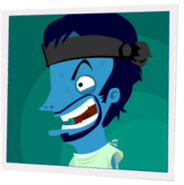 File photo from Pagoda of Pain 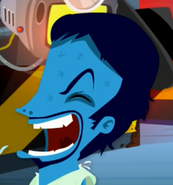 Comparison of Faker Hubris and his original

Comparing the front of the two
Add a photo to this gallery
Retrieved from "https://amateursurgeon.fandom.com/wiki/Faker_Hubris?oldid=8625"
Community content is available under CC-BY-SA unless otherwise noted.