Start a Wiki
Flicky "John" Flick is a Common type partner from Amateur Surgeon 4: Re-Generations. He is the 5th patient (P5) encountered in Dr. Rashid's side story.

Trained by the British secret services and former twelve year holder of the "World Darts Champion" title, John is a sharp marksman.

John is re-generated, injured by his own darts. One of his eyes had suffered as well, but Rashid was able to implant a special magnifying device to restore his sight. John gives his cheers to Rashid then turns to find a nearby pub. He's oblivious of the two giant claws the intercom has set on him as he walks off. He's soon placed back into the Re-Generator.

Wow! A world-class darts champion trained by the secret services! I can see how this guy would come in handy in the operating theater!

Proud yet affable, John is a light skinned, portly man of short stature who enjoys going to bars and pubs for celebratory beer, snacks, and a couple round of darts. His hair's faded and his huge eyebrows are bushy. His cheeks and nose are tipped with blush. He wears a blue and orange polo shirt with blue jeans and black shoes. He owns a set of red-ended darts with medical crosses on their flights.

John's initial heart rate is low, so you may want to give him some shots of the injector first. Extract all the darts and staple, cauterise, and gel the leftover wounds from John's face. You should then be directed to slice into his eye. Cure the poison puddles with either the syringe or the cutter and vacuum. You'll then have to place down various parts of a vision-enhancing device into the eye (refer to example at right).

John's face full of his own darts

John about to be grabbed by the intercom's claws 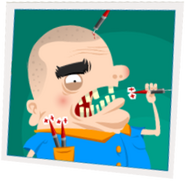 File photo
Add a photo to this gallery
Retrieved from "https://amateursurgeon.fandom.com/wiki/Flicky_%22John%22_Flick?oldid=8856"
Community content is available under CC-BY-SA unless otherwise noted.