Start a Wiki
Flow Master is a partner who first appeared in Amateur Surgeon 3: Tag Team Trauma. He later returns in Amateur Surgeon 4: Re-Generations as a Common type partner. His partner surgery can be found under the label P25.

Flow Master is a well known street surgeon who has mastered the fine arts of Kung Fu and urology through three years of experience.

He is one of the many partners that can be used throughout the game. Though he does not have a main part in the story, he will appear in cutscenes with Ophelia Payne if chosen as the current partner.

Flow Master is re-generated as Dr. Rashid and Ophelia get to work on mending the rest of the glitched partners. The Master is riddled with weapons, as well as infected kidneys. After being healed, Ophelia tricks him into heading back into the Re-Generator, insisting that it is a portal to Guru Mountain where patients await his teachings in "the Way of the Flow".

Legend has it that he's the only surgeon to have a black belt in both Kung Fu and urology. He must be a little bit rusty, as he's full of ninja stars at the moment.

Expressing a seemingly calm and even spiritual demeanor, Flow Master appears wearing an open vest and pants, which sleeves are torn. A sash hangs from the waist. Two pens sit in his vest pocket, one blue and one red. A red sash with a medical cross on the front holds up his spiky, dark brown hair. A faded beard and thick, wavy eyebrows make up his face. His body is well built due to years of training.

Flower Master
Add a photo to this gallery

Firstly, extract the shurikens and scroll from Flow Master's body with the tongs, then patch up the large and small cuts as normal. Alongside this, there are two shurikens hidden in the body, which can be located with the scanner. When you have pinpointed their location, slice them out with the pizza cutter to reveal them for removal. Once cleared, you will be able to make an incision into his kidneys. Besides the single pool of poison resting on the right kidney, there is also a shuriken hidden inside that kidney. Afterwards, the left kidney must be sawed off and replaced. 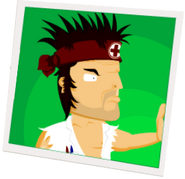 File photo
Add a photo to this gallery
Retrieved from "https://amateursurgeon.fandom.com/wiki/Flow_Master?oldid=9126"
Community content is available under CC-BY-SA unless otherwise noted.