These frogs were released from the Temple Ruins within Mumbo Jungle, presumably by Hubris D'Obscene after he had pestered Keith for poisons. They had overrun the jungle, leading Lady Saturday to investigate further into the cause. Meanwhile, Hubris had taken some of these frogs into his custody for studying. He'd soon create a dangerous type of queen frog using the original dart frogs' poisons. This queen, though having a different appearance and pattern then the former, would be able to birth newborn dart frogs. Hubris would later stuff this queen into a huge syringe, which he would use as a trap against his most despised enemy, Alan Probe.

These types are found in Deceased Keith's surgery. They are blue with black spots. Their weakness is the lighter, however the player cannot simply flick their lighter upon them, for they'll emit a protective gas that will extinguish the flame in an instant. To counter this, the player must zap the frog with the car battery first, to which they'll hop around frantically as a result and flash green. The player may then use the lighter against them. These frogs take three successive hits to kill. Be wary, these frogs will shoot poisonous darts from their mouths.

Mini dart frogs (or baby dart frogs) are present during Alan Probe's surgery in the Exile Clinic. These little ones can be quite a handful, especially in large numbers. You will find them resting in bubbles, which can be popped by the player's choice with a flick of the lighter. The bubbles will eventually pop on their own if the player decides not to disturb it. These frogs are much smaller than their adult counterparts. Due to this fact they're much weaker and can only withstand a single hit. Do not underestimate their vitality though, for what they lack in strength they make up in numbers. The longer these frogs are left hopping about Alan's body, the quicker they drain his heart rate.

This is a boss creature encountered in Alan's stomach. She's big in size with a black, spiky exterior and a bright, blue skull. To defeat her, the player must attack her body with the lighter. When she's been damaged enough, she will birth newborn mini frogs and retreat offscreen for a short time. The queen has the vitality of a normal adult dart frog.

Both the adult dart frog and queen frog have retained their patterns throughout the series. However, mini dart frogs have received a bit of a change. In the original Surgeon 3, the mini frogs had to be handled the same way as the adults in order to off them. However in Surgeon 4, the lighter is no longer necessary since the mini frogs will die from a single hit with the car battery. As well as this, the player is also allowed to extract a mini frog while they're still in their bubble. 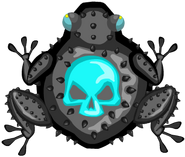 Big Queen Frog
Add a photo to this gallery
Retrieved from "https://amateursurgeon.fandom.com/wiki/Frogs?oldid=9229"
Community content is available under CC-BY-SA unless otherwise noted.