Start a Wiki
Gargonax Suckoluxx is a Legendary type partner introduced in Amateur Surgeon 4: Re-Generations. He is the final patient (P28) to be operated on in Dr. Rashid's side story. This time however, Ophelia Payne is the one who performs the final operation.

One day in the year 1947, Gargonax had come to planet Earth with his parents for a holiday trip. During the trip his parents had suddenly disappeared. With essentials such as a "My First U.F.O." kit and a lot of chutzpah, Gargonax set out to find them. He plans to collect junk from Earth in the meantime to turn it into fuel. He'd then use the fuel to help him return to his home planet, hopefully with his parents in tow.

Presumably re-generated randomly by the Re-Generator, Gargonax was marveling at the Useful HQ's lab interior until Ophelia noticed him. He asks if Ophelia has ever dealt with exotic diseases before informing her that his body has been "invaded".

After Ophelia helps destroy the invaders from within, an FBI agent by the name Agent Inconspicuous arrives to take Gargonax into custody. Ophelia tries to protest, but Gargonax retorts that she'll blow his chance at a free desert vacation. Reluctantly Ophelia gives in, though feeling a bit vexed. Rashid wheels in his tea trolley at the last moment, asking if he missed anything.

Mayday! Action stations! Our friend from space is under attack from what seems like...tiny versions of himself? Space politics is weird.

Gargonax is a small green alien with spots on his head, a single eyeball, an antenna, two hands and five tentacles. He uses a special red rocket-type U.F.O. for mobility, which has special tubes attached to it. The tubes on the bottom act as small rockets while the ones from his back act as vacuums for collecting Earth junk. It appears that Gargonax takes high interest in the wonders of Earth and enjoys relaxing in the planet (specifically "motels" in the desert), though he's also determined to find his parents and return home.

When entering into the first incision, there will be two invading U.F.O.'s hovering over Gargonax's double hearts. You'll notice another U.F.O. has already crashed into the heart. Use the car battery to damage the two hovering ones, but be careful: U.F.O's are armed with a defense mechanism. They'll activate a force field while shooting a laser into the body. The force field protects them from the car battery while the laser leaves behind burns. U.F.O's take three consecutive zaps total to destroy, which they'll crash into the body afterwards. Extract them and patch up any cuts left behind from impact.

Next is the stomach, which has two flames and two U.F.O.'s. Suck up the fire with the vacuum and defeat the U.F.O.'s like before. Then you'll have to make an incision into the stomach to fight three more U.F.O.'s. Alongside them are four flames and pieces of "Chocolate Monuments" (with the wrapper). You can extract these pieces with the tongs. When exiting the stomach, a final U.F.O. will be waiting for you before close up. 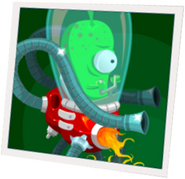 File photo
Add a photo to this gallery
Retrieved from "https://amateursurgeon.fandom.com/wiki/Gargonax_Suckoluxx?oldid=9182"
Community content is available under CC-BY-SA unless otherwise noted.