Start a Wiki
Hogtopus is a Rare type partner from Amateur Surgeon 4: Re-Generations. Its surgery can be found under the label P27 in Dr. Rashid's side story.

It is unknown how Hogtopus came to be. Rumors have it that the tentacled hedgehog was produced by mutation from toxic ooze. It's also rumored that it may have been put together by a team of mad scientists. Or it could just be a glitch from the Re-Generator itself. Hogtopus has confirmed that the second rumor is true, though it was by the work of a single scientist.

Hogtopus is re-generated by Rashid, its tentacles impaled by its own quills and its pipe system from within damaged. Noticing Rashid's fear, it explains that it did not wish to be made the way it is, meaning no ill will against him. Rashid then apologizes to Hogtopus, which it accepts nonchalantly before willingly hopping back into the Re-Generator.

Again with the weird surgery partners! This one seems to be some sort of gerbil driving a squid. I am starting to feel a little sick and tired of operating on hideous mutants.

Possessing the ability to speak, Hogtopus appears to be casual and friendly despite its current state. It is a small brown hedgehog with eight green tentacles attached to its body, lined with light purple suckers. It seems to use these tentacles to move around rather than its hedgehog limbs.

Egg-Topus
Add a photo to this gallery

Before beginning on the surgery, you may want to shoot Hogtopus with some helpings of the injector, since its heart rate will drain at a rapid pace due to all the injuries in the area. For the first two areas, which are its tentacles, you must extract the quills lodged in the tentacles. Be cautious when removing them, for poison will blast from the wounds when removing the quills. Vacuum up the excess poison. When you've cleared all injuries from both tentacles, you'll be taken to the body. When you've cleared up the gunk, you will have to make an incision into the body, where you'll have to repair the pipe system. Be sure to clear up the rest of the gunk inside first, then get to work on placing the pipes in their proper places (refer to photo at right).

Hogtopus explaining his coming to be to Rashid 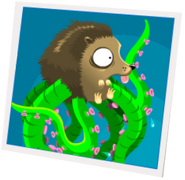 File photo
Add a photo to this gallery
Retrieved from "https://amateursurgeon.fandom.com/wiki/Hogtopus?oldid=8485"
Community content is available under CC-BY-SA unless otherwise noted.