Start a Wiki
Hubris D'Amour is an exclusive partner in Amateur Surgeon 4: Re-Generations. As of now, he's no longer available in the Re-Generator, for he was only obtainable through the Heartbreak Hospital event during February. However, it's possible he may return in the future.

While attempting to create a clone of himself, Hubris D'Obscene accidentally dropped sugar, spice, and "assorted nice things" into the cloning vat in the lab, thus producing Hubris D'Amour. Refusing to take part in his creator's malicious intentions, D'Amour took a vow to correct his father's wrongdoings by making the world "a touch more fabulous".

D'Amour shares similar traits with his creator, with the exception of a few features, such as his slightly messy long hair and the beauty mark under his eye. Unlike the usual grey hat, D'Amour dons one in red. He wears a matching long coat over a black long-sleeved shirt. Instead of pants, D'Amour wears what appears to be unzippable underwear, topped off with a pair of high heeled boots. He holds a rose between his teeth, causing blood to drip down his grinning lips.

Personality-wise, D'Amour is said to be the opposite of Hubris D'Obscene. It can be presumed he's kind and considerate, as well as charming due to his looks. It can also be assumed he is a flamboyant character due to his pose, attire, and the final line in his official partner bio. 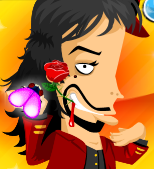 D'Amour and his Love Bug

Hubris D'Amour with Scarlett Throbbing and Sax Machine for Heartbreak Hospital
Add a photo to this gallery
Retrieved from "https://amateursurgeon.fandom.com/wiki/Hubris_D%27Amour?oldid=8511"
Community content is available under CC-BY-SA unless otherwise noted.