Start a Wiki
Ivor Cordial Weiner, a.k.a I.C. Weiner, is a new partner introduced in Amateur Surgeon 4: Re-Generations. He is also an unlockable patient, labeled under P23.

Said to be an evil German inventor, Ivor had learned to adapt to the freezing temperature of ice with the help of the machine dubbed "The Fridginator". Due to this adaptation, he cannot live beyond the freezing point. If this happens he will become very sick and most likely die, as partly shown during his partner surgery. His in-game bio states that he was part of the Useful Brotherhood for quite sometime. It is later revealed that Hubris had betrayed him, trapping him inside the Re-Generator in the lab.

Seeking a way to cool down the heated lab from Nurse Luci's flames, Dr. Rashid hesitantly re-generates Ivor. However he is brought back in a near-death state due to his broken cooling system. When his machine is successfully fixed, he initially opposed going back into the Re-Generator. But he quickly changes his mind after Ophelia's mention of a flamethrower.

I'm not sure I should really be Re-Generating buddies of Dr. Hubris, but I'm sworn to surgeon wherever surgeoning is needed!

Speaking in a heavy German accent, Ivor displays a resentful attitude after being duped by Hubris. He has an odd habit of telling ice-related puns. When it comes to his appearance, Ivor wears a heavy coat with dark boots.

He previously had a tan skin tone and black hair. Due to the machine producing a below freezing temperature within his body, his skin has turned light blue, along with his hair turning as white as snow. This also gives him an ice cold breath, as well as a snowy aura that appears around his hair. Other noticeable features are his pointy teeth, mustache and squinted eyes. He carries around what appears to be a freeze ray, which he had created himself.

Ivor is in very bad shape when beginning the surgery, so you will have to boost his heart rate with the injector . When you enter the first incision, you will have to use the pizza cutter to disconnect the guts. Extract the piece of flesh from inside the Fridginator, then proceed to place the given ice cubes into the machine until it is full. Then you will make another incision, where there are ice chunks and frostbite that need to be thawed with the lighter . Pull out the ice shard with the tongs and heal the visible wounds.

Afterwards, there are four hidden metal shards that must be found with the scanner and sliced out for removal. Then when given the tubes:

Afterwards Ivor will look like his icy self again. 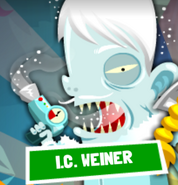 Weiner in the newcomer bundle 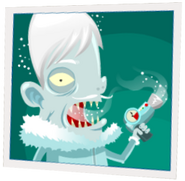 File photo
Add a photo to this gallery
Retrieved from "https://amateursurgeon.fandom.com/wiki/Ivor_Cordial_Weiner?oldid=8700"
Community content is available under CC-BY-SA unless otherwise noted.