Jack Ratchett is a minor character in Amateur Surgeon 4: Re-Generations. He is the very first patient of the game, acting as the tutorial level on one's first playthrough. After obtaining enough stars, the player can unlock his bonus surgery 01a.

At some point before the events of Re-Generations, Jack was an average miner, until one day he was crushed by large boulders on the job. Thankfully Ophelia Payne had been notified and came to his aid. His completely broken spine was replaced by a back brace created by the Reverend.

Since then he has been able to return to his usual mining. He now works under the orders of the mysterious intercom, searching for and collecting Bleed Diamonds from underneath the lab.

In the middle of his search, Jack was apparently crushed by huge debris once again. Approaching Ignacious Bleed II, he desperately asks him to fix his back brace. Using the tools provided by the intercom, Ignacious was able to utilize them in a way to heal the injured miner and repair the back brace. Thankful for his help, Jack offers him a Bleed Diamond, the only one he managed to find in the area.

My first surgery! The patient certainly seems worthy of record. He suffers from a crushed spine, no doubt due to a cave in. Apparently they're frequent enough to warrant a mechanical implant.

In the game, Jack is usually shown sporting a dingy green coat, black pants and red boots, wearing a hard hat atop his head. He is almost always shown carrying around a pasty. Shown to be amiable and generous, he offers Bleed Diamonds and even coins to the player occasionally.

There seems to be a bit of inconsistency when it comes to Jack's eyebrows. When shown facing forward, his eyebrows appear bushy and huge(similar to Dr. Rashid's) as opposed to his side view.

This surgery acts as the tutorial level, so it is very simple compared to the later surgeries. Cauterize the small wounds with the lighter and gel, then make an incision and remove the rocks with the tongs. Patch up the large cuts with the stapler, then cauterize. Repeat for the next incision, vacuuming up leftover blood.

Use the chainsaw to cut the boulder into pieces for removal, then pick up the bird feathers with the tongs. You cannot vacuum them up unfortunately. Entering into the neck, you'll find Tweeter the canary, who is dead at the moment. You'll have to clean up the feathers before you can slice into the bird. After doing so, chainsaw as directed and replace the defunct heart with the clockwork one. Returning outside the bird, patch it up like normal and it will fly out of Jack's neck.

All that is left to do now is setting up the back brace. Inside his back are scattered spine bones that must be removed. Once cleared up, you'll be given two components to place:

Once set, the final area is the lower part of Jack's back. Saw and remove the miniature boulder. After removing that and the rest of the broken spine pieces, the back brace will lower itself downward, where you can then place the final component.

Jack back in shape

Jack in the extra surgery case

After receiving his new brace

Pre-operation screen for both surgeries 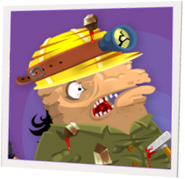 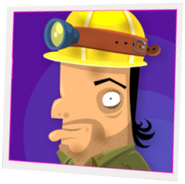 Jack as he appears in the Pocket Morty story (Fleeb Cup)

and Diamonds
Community content is available under CC-BY-SA unless otherwise noted.
Advertisement