Karl is a coffee-nut who will do everything in his power to obtain such caffeinated goodness.

Karl approaches surgeons Alan Probe and Ignacious Bleed, his body twitching and teeth chattering. Obviously a coffee nut, he explains that he had to hide coffee within his body in order to smuggle it, therefore needing Alan to "make with the ol' slice and dice" and retrieve it for him.

Tight airport controls have forced the patient to secrete a stash of coffee about his person. He appears to have had the coffee surgically implanted as opposed to inserting it into his-

We QUITE get the picture, Alan! -DR. Bleed

The patient is rearing the limit of caffeine tolerance to the point where the slightest increase in heart rate could kill him. So probably don't mention his appalling taste in shirts. Find his coffee deposits and remove them. Then if desired, percolate and serve with cream and sugar.

Tight airport controls have forced the patient to secrete a stash of coffee about his person.

As Alan shows Ophelia around one of his Bleed Everywhere hospitals, they run into Karl in the pharmacy. He states that he had just consumed a large amount of coffee beans (about four kilos' worth) and asks that they be removed before his heart "LITERALLY EXPLODES".

After Surgery, he seems to slow down after removing the excess coffee from him.

OBSERVATIONS: I'm not sure how much coffee is "too much", but his blood type is coming up as "Columbian" - which can't be good...

(Look at him twitch! -ALAN)

SYMPTOMS: His heart rate is sky-high... And there are ACTUAL coffee beans embedded throughout his body! HOW?!

(Just be glad we're fingind out with a pizza-cutter - not a rubber glove! -ALAN)

ACTION: We need to remove as much coffee as we can... without killing him stone dead in the process.

(If his heart rate drops too fast, healing gel might be the perfect pick-me-up! -ALAN)

Karl appears in the Epilogue of the game, dressed in a shark costume. He had received an invitation to the party at the mansion, where upon arriving he had smelled a sweet aroma of coffee. Following the scent, he is somehow able to solve the puzzles of the mansion and make his way into the owner's hidden laboratory. Upon seeing the huge vat of strange blue coffee, Karl immediately hops inside, unaware of the harmful mutating C-virus. Fortunately he is cured later on by Ignacious and Alan.

We have descended deep into the bowels of the lakeside mansion and come face to face with a terrifying shark, swimming in what smells like...coffee? The beast seems harmless for now, but we had better operate quickly before it becomes enraged!

Karl's skin is quite tanned, accompanied by brown medium-length hair. He is always shown wearing a coffee-cup patterned shirt, matching plain shorts, and brown sandals. Thanks to the caffeine, Karl has big shot eyes and chattering teeth. His words pass by in a flash when speaking. Karl is very much addicted to coffee, causing him to become hyper and energetic. He will become furious if denied from his coffee. Karl is pretty clever as well, as shown by his method of coffee smuggling in AS1 and his solving of the puzzles in the Epilogue(though that didn't save him from his gullibility).

Cut into Karl and slice out the coffee with the pizza cutter, then vacuum the liquid up. Patch up the cuts, then use the etchy-sketchy(ultrasound in AS4) to locate the three hidden coffee stacks. Cut out the stacks as directed(AS1 only) then extract them. Extracting them will leave behind more coffee to cut out and vacuum. After successfully patching up all wounds, Karl is ready for close-up.

First, slice into his head and remove the coffee beans embedded into his brain and get rid of the pus boils by cutting them open or sucking them out with the red syringe. Use the scanner to scan an extra bean from Karl and remove. Use Staples, Lighter and Gel for the cuts. Next, move onto the liver and start by clamping down the burst arteries, burning the wounds and gelling them. We do the same procedure as done with the brain. Next, the player should cut in deeper to the liver and do the same thing as the last and use the scanner for any beans hidden underneath, then tend to the wounds in order to finish.

Saw off the fin. When extracted, it'll reveal two radioactive coffee packets to remove with the tongs. Proceeding to the chest, you'll be directed to saw off part of the costume to gain access to the body. After clearing blood, blue boils will quickly fester up. Slice them and vacuum up the remaining gases. Fix up the large cuts left behind, then make the directed incision. Extract all the items lodged inside the large cuts (party poppers leave behind confetti). Cure the blue poison with the syringe or the slice-and-suck. There's blue flowers here from the second episode. Wait for them to open up, then zap them (3 hits each to kill). Extract when dead.

When you get to Karl's mutated head, there's more boils, coffee packets, and poison. The aftermath will leave a bunch of cuts on his face. When you've cleared up the face, you'll have to enter the energized brain, with more boils and poison. When slicing in deeper, there's swirling blue and brown coffee beans which must be caught and removed with the tongs. When exiting the body afterwards, Karl will be grinning at you, his skin transitioning back to normal.

Karl: Hey guys! Guys! You gotta help me, see? I was at customs, ok? Customs! Coming back from the coffee capital of the world oh man you should have seen all the coffees they had!

Karl: But i had too much coffee they said! TOO MUCH! I said i'll tell YOU when I've had enough!

Karl: I had to hide it! Had to! I have to have that sweet, sweet caffeine kick!

Karl: You gotta get it back for me! Do your surgeon thing! Do it do it! Make with the ol' slice and dice, the old snip-snip chop-chop!

Karl: Oh wowee, oh yowza! You got it! Oh i could kiss you! I could kiss the coffee, that sweet, sweet mocha temptress...

Karl: LISTEN DOC SHUT UP I JUST ACCIDENTALLY ATE A BUTT-TONNE OF COFFEE BEANS IS THIS BAD?

Karl: ...SERIOUSLY THOUGH I HAVE JUST EATEN ABOUT 4 KILOS OF RAW COFFEE BEANS

Karl: I THINK MY HEART WILL LITERALLY EXPLODE AND KILL ME IF MY IMPACTED COLON DOESN'T GET ME FIRST CAN YOU HELP?!

Alan: Ha ha! Up on the table! Take it away Ophelia!

Ophelia: How are you feeling?

Ophelia: You know, we COULD have just MEDICATED him to reduce his heartrate! Wasn't that surgery MASSIVELY unnecessa-

Alan: I'm... not really a fan of pills or medicenes - I get confused over the names! Probiotics and diuretics? NOT the same thing!

Alan: ...and the correct way to administer an analgesic? The clue ISN'T in the name, you know!

Ophelia: How about we move on to the next surgery and never speak of this again?

Karl sipping some of his "sweet mocha temptress" 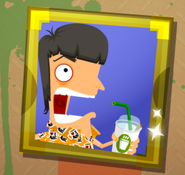 Karl in the AS3 credits

Karl infected by the C-virus

You think it's a shark

But it's actually KARL
Community content is available under CC-BY-SA unless otherwise noted.
Advertisement