Katie's a young lumberjack and lecturer in gothic literature. She enjoys activities a typical young girl would, such as ponies, braiding her dolls' hair, and experimenting with her father's lumber tools on occasional midnights. Katie's quite skilled with both her chainsaw and literature for such a young age.

Katie is re-generated as an ancient woman. Thankfully, Rashid had just the cure for her age issue: Dr. Bleed's Pain Away. Injecting it into parts of her body via injector, Katie's youth is replenished. However, Katie becomes a bit upset with Rash after she recovers, since apparently she wanted to be older. Before she could finish saying her piece to Rash, the intercom uses a robot claw to lift Katie up, returning her to the Re-Generator.

Oh dear! The little girl who showed up on the computer has Re-Generated as a frail old lady! Well, they say that Dr. Bleed's injection gel does wonders for wrinkles.

Katie is shown as a small girl wearing a pink dress and red shoes. She possesses pale skin and blue hair. She carries her chainsaw on her back. She displays a calm, intellectual attitude, though some may say she's also intimidating (it's possible she was going to attack Rash with her chainsaw for curing her).

K T Custer
Add a photo to this gallery

Insert the injector into various parts of Katie's wrinkled face and arms. They'll regain their youth as you inject them. When her face is fully restored, you'll be directed to make an incision into her brain. Vacuum up the dust, then use the lighter to destroy the odd charcoal parts. They'll leave behind inner poison, which can be sliced out with the pizza cutter and vacuumed up. After patching up, you'll be given a piece with two wires to place in the middle of the brain. Plug the given battery in afterwards and shock it with the car battery . This will restore her brain, leading to close-up. 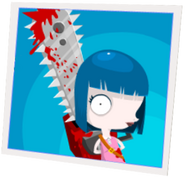 File photo
Add a photo to this gallery
Retrieved from "https://amateursurgeon.fandom.com/wiki/Katie_Cutter?oldid=8696"
Community content is available under CC-BY-SA unless otherwise noted.