As the tour guide of Kannibal Korner, Lady Saturday watches over the village. She is able to practice necromancy with her voodoo powers. Sometime during AS3, the village becomes overrun by dart frogs, so she sets out to find out the cause of such invasion.

Lady Saturday finds Ophelia Payne wandering into the Temple Ruins. Thinking that she is a thief, she approaches Ophelia, planning to attack her with her voodoo powers. However she lowers her offense as the wall behind her collapses, revealing an old laboratory with a dead man inside. Realizing that it is the source of the dart frogs, Saturday brings the man back to life and asks Ophelia to assist in her necromancy.

Afterward, she apologizes to Ophelia for her prior behavior, stating that she was just worried for her village. She decides to join Ophelia as a partner.

During Rashid's little adventure, he re-generates Lady Saturday, who appears to be having a huge instability problem with her magic, along with being overrun by spooky ghosts. Using the vacuum, Rashid is able to trap the ghosts by sucking them up. Finding a damaged voodoo doll, Rashid fixes it, stabilizing Saturday's powers.

Upon being awakened, she at first states that she is opposed to the idea of being brought back to life. However she eagerly takes the chance afterward, cutting out the lights and fleeing the lab.

I think there is history between this spooky lady and my boss! How exciting. Maybe after I deal with her supernatural injuries I might get some gossip.

Samurai Saturday
Add a photo to this gallery

Her hat starts wobbling around and use the Pain Away gel to stop the wobbling. Then, use the chainsaw to cut open into her hat either vacuum the 3 ghosts or shock them and suck the ectoplasm. Then, place back the sawed off part and burn-and-gel it back into place. Next, move on to the chest and cut open into her heart, where we see lavender will-o'-wisps and two ghosts and vacuum. However, continuously vacuum the fires until they stop. Next, cut into her heart and use the Pain Away gel to stop the wobbling in her Voodoo Doll. However, it'll cause 4 ghosts to pop out and some cuts to occur, along with two fires around the eyes. Vacuum the ghosts and the fire and tend to the cuts. 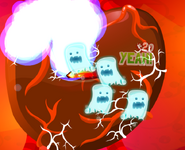 The paranormal phenomenon within 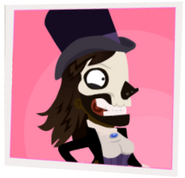 Samurai Saturday bio
Add a photo to this gallery
Retrieved from "https://amateursurgeon.fandom.com/wiki/Lady_Saturday?oldid=8483"
Community content is available under CC-BY-SA unless otherwise noted.