Start a Wiki
Lord Meowington is a Rare type partner in Amateur Surgeon 4: Re-Generations. He also appears in Rashid's partner surgeries, under the label P15.

Lord Meowington is a small and cuddly feline, owned by an unnamed wealthy individual. Living a pampered life in a grand mansion, Meowington one day finds a robotic vacuum cleaner, riding it around for transportation. Since then, he has been deemed useful for surgeries with plenty of flame.

Dr. Rashid goes onto the Re-Generator's computer, re-generating Lord Meowington. A fatal mistake arises whilst re-generating the cat, forcing the poor animal inside of his vacuum. Luckily, Rashid is able to use his chainsaw to take the machine apart and rescue Meowington.

Smitten by Meowington's cute stature, he felt reluctant to place him back inside the Re-Generator. He is soon put back in anyhow under Ophelia's orders.

Aw! A cute little kitty! Wait...Where is he? Hmm. Guess I'll just chainsaw open this little machine and take a look inside.

Meowington is a small and fluffy kitten. A monocle rests on a single eye. His red collar is decorated with a shiny gold medallion. His fur is a violet color, while his nose and the inside of his ears are pink. His eyes are huge and spaced out, his tongue always sticking out of his mouth.

Meowington is always shown as a sweet and innocent kitty. His adorable appearance cause many to fuss over him. Fish appears to be the feline's preferred food.

Meow-F.O
Add a photo to this gallery

Most of this surgical procedure requires the chainsaw. Firstly, use the vacuum to clean up the small dust balls. You can use the tongs if you desire more points. Afterwards, you'll be directed to saw off the vacuum's cover with the chainsaw. Remove the cover with the tongs and enter inside. Vacuum up the flames, then staple, cauterise, and gel the single scratch. When finished with those steps, you will have to use the chainsaw in order to remove the parts covering Meowington's body. Vacuum up the dust, then remove cramped Meowington and his monocle from the innards of the machine.

Now you will be taken out of the machine and into a kitchen. On the floor will be a dazed Meowington, a food bowl lying beside him. You will be given his monocle to place back on the eye facing left, then you will be given a couple of fish, which you must place in his food bowl. Meowington will immediately recuperate, overjoyed by the sight of the fish.

Meowington found inside the suitcase during surgery E2's partner special 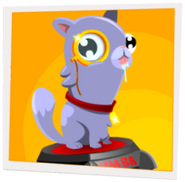 File photo
Add a photo to this gallery
Retrieved from "https://amateursurgeon.fandom.com/wiki/Lord_Meowington?oldid=9463"
Community content is available under CC-BY-SA unless otherwise noted.