Mister Caruthers is Peter's pet komodo dragon, who is usually seen by his side.

Sometime before the events of the game, Peter had a makeshift flamethrower surgically inserted into Mister Caruthers, giving him the ability to breathe fire. However, his flame began to fizzle as time went on. When Alan Probe arrives on the scene with his grandson Bradley, he helps enhance the flamethrower, replacing the broken parts with new ones. This allows Caruthers to spit out a huge amount of fire, possibly more than he did before.

Rashid re-generates Mister Caruthers while searching through the files of the Re-Generator. Seeing him filled with creepy-crawlies, Rashid takes out the car battery and exterminates them all. Not wanting to see the poor lizard de-generate, he attempts to secretly let Caruthers free from the lab, taking only his accessories to put back in the re-generator. Although Ophelia noticed this, Caruthers was able to leave without any problems.

I didn't know the Re-Generator had animals in it too? It says here that this little guy likes to eat bugs. I have a feeling that might be the source of his tummy troubles...

Mister Caruthers normally has a top hat on his head along with a monocle, smoke pipe, collar and cane. In his later years he is dressed in feminine apparel and makeup, along with a shaggy grey wig and beard. Caruthers has a calm demeanor and takes a decent liking to Peter, though he sometimes seems annoyed with him. Insects are the lizard's favorite snack.

There's a lot of burns that need to rubbed with Pain Away on the neck. Then there's flames you need to suck up with the vacuum when you slice into him. When extinguished, you can saw off the dead canisters and replace them with better ones. Cutting into the next few parts of the body, you'll have to saw off the lighters to replace them. In the last part you'll be "shaving" off the beard with the chainsaw and replacing it as well.

There's a bunch of bugs in this stage, just warning you right now. Lots of poison to suck up, too. Slice open the various clear-looking eggs with the pizza cutter to open them, letting out spiders to zap. That's pretty much the entire surgery, where you'll have to zap spiders and ants located outside the stomach and intestinal areas. The last bug may annoy some. Inside Caruthers' hat is a jittery fly, which tends to fly around the screen in swift speed. The key is to wait until it finally lands to take a break from buzzing around, where it leaves it vulnerable to zap.

Partner bio for AS4

Caruthers with Peter in ASCF

His look after surgery

He can spit mad fire 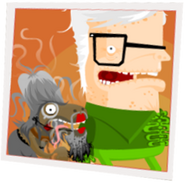 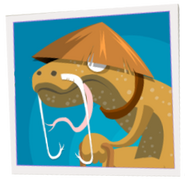 Master Caruthers - File Photo for Pagoda of Pain
Add a photo to this gallery
Retrieved from "https://amateursurgeon.fandom.com/wiki/Mister_Caruthers?oldid=9498"
Community content is available under CC-BY-SA unless otherwise noted.