Start a Wiki
The Pink Monster, also simply known as Monster, is a character from Amateur Surgeon 4: Re-Generations. As well as being the 55th patient of the game, he also has a bonus surgery labeled under 55a.

Hubris D'Obscene had attempted to create a new bio-weapon inside his headquarters, using Contort-O's body as a base. He produced a huge, pink monster as a result, Contort-O being fused inside it in the process.

Sometime before the main storyline, Contort-O continued to have heated self loathing arguments with himself from inside the Monster. This annoyed Hubris so much that he had implanted a speech restricting device onto Contort-O's brain, causing him to speak in only grunts.

Moments after returning from Guru Mountain with Mr. Giblets, Ignacious was conversing with the intercom about his next task before an alarm had suddenly sounded. Somehow the Monster had broken out of its vault. Contort-O, currently suffering from Hubris's device, attempts to request help from Ignacious from inside the Monster. Though frightened, Ignacious steps up and operates on the monster, eventually separating the two from each other.

I, Hubris D'Obscene, shall now perform surgery to turn my most annoying failure of an attempted bioweapon into my greatest triumph...by rewiring its brain so it shuts up for 5 minutes.

The Monster appears as a big, burly, and disfigured creature wearing khakis and black shoes. He has a flat, spiky mass of dark hair on his head. His pink skin seems sliced into sections, even leaving a few holes in his body. A string of inner flesh is exposed on his arm.

While Contort-O is inside the Monster's body, parts of him can be seen prodding out from the Monster's skin, his huge brain being a primary example.

Slice into the arm. Use the pizza cutter to cut off the straps from the arm, then remove the cut-off strap pieces. Then use the chainsaw to split the arm in half to remove it. Afterwards you'll have to patch up and move onto the other arm. Repeat the previous steps as before to remove the straps and arm. The calculator can be removed with the tongs as well. Moving to the next area, you'll find Contort-O's chest inside, which you'll have to saw to pieces to remove it. Then comes the lower body. Slice and extract the straps, then saw the legs off to separate the body into three pieces to remove.

The last area is the head. Saw off and remove the huge brain, then do the same for the pieces of Contort-O's face. When finished, you'll be able to close up. The Monster's head has noticeably shrunk in width.

Make the incisions into the head and brain. Saw off the chunk of brain where directed, then place down the given device into the flesh hole (after you clean up the blood of course). After burning and gelling the device in place, five screw pieces will be set in front of you. You'll need to set them in the correct spots (refer to photo). When the pieces are set, use the lighter to weld the connected wires and the small tips of the device together. Then shock all five pieces of the screws.

Close up Contort-O's brain, then slice into the monster's. His strange brain is covered with boils, which can be sucked up with the syringe (slicing them also works, but this will require extra work, since it leaves behind extra poison puddles and large cuts. This can help acquire more points, but will consume more time). There's also a fly, which can be zapped once its stopped its erratic flying pattern to rest. When the boils and fly are taken care of, you must make a cut into the brain and place a chip into it. Cauterize and gel the cut (do NOT staple it), then you will be given two wires, one red and one blue. Connect them with the matching colored dots, then burn the wire and tip together like you did with the device. Then close up with whatever time you have left.

Pre-operation pose for both Surgery 55 & 55a

The Monster during Hubris's past, after having the device installed 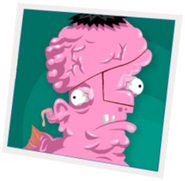 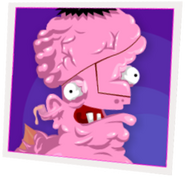 File photo ~ Surgery 55a
Add a photo to this gallery
Retrieved from "https://amateursurgeon.fandom.com/wiki/Monster?oldid=7940"
Community content is available under CC-BY-SA unless otherwise noted.