Start a Wiki
Muta-Bear is a patient from Amateur Surgeon 3 and is the 61st patient of Amateur Surgeon: Re-Generations. He is a mutant bear created by Hubris who was meant to attack Ophelia, but he succumbed to the painful spikes and boils, falling unconscious. As Hubris flees the scene, Ophelia decides to operate on the bear to return him to normal.

Discovering an old sewage farm that's processing mutagenic goo? Fine. Being attacked by a giant mutated bear?! NOT WHAT I SIGNED UP FOR!

Attacked? It fell over! ...that said, I do have some release forms for you to sign. -ALAN

Did you notice his totally awesome hat? It'd be a crying shame to miss that. -ALAN

Use the tongs to extract the huge spikes from Muta-Bear's chest and fix the cuts as normal. You'll then proceed to his stomach where the boils are. Either use the syringe or the cut and vacuum tactic. Now when you cut open Muta-Bear, you'll find his heart is infected with mutagenic serum. Disconnect the wires with the pizza cutter then extract the lodged in needles(in AS3 removing the needles will leave behind poison.) Fix up the wounds then chainsaw his infected heart out. Chainsaw through the chains of the mutagenic serum and extract it. Then place the new healthy heart and burn and gel it in place and close him up. Now Muta-Bear can have a nice rest. 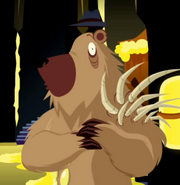 Muta-Bear's infected heart as it's supposed to be seen...

...versus how it may be seen due to a visual glitch.
Add a photo to this gallery
Retrieved from "https://amateursurgeon.fandom.com/wiki/Muta-Bear?oldid=8265"
Community content is available under CC-BY-SA unless otherwise noted.