Desiring to be a part of something "cool", Muta-Brother decides to join the Useful Brotherhood, only to become disappointed later on.

He was tricked into being injected with mutagenic serum as a test subject. Ophelia Payne approaches the irritated man and offers to help him in exchange for information about Hubris and his plans.

Unlike Useful Brother, he knows very little about Hubris, stating that he was just some sap who got tricked into filling with mutagenic serum. However Muta does mention that he has gathered a following, telling Ophelia that all this and the poison experiments he had experienced must be in preparation of something. Afterwards it can be assumed that he left the Brotherhood.

OBSERVATIONS: I'd guess what we're looking at is the effect of that mutagenic goo we found in the muta-bear when applied to a human. It's...pretty terrifying!

SYMPTOMS: The patient has developed boils and is growing lots of horn and bone protrusions that look incredibly painful. Presumably the mutagenic goo is causing all this.

I'm all for saving the patient, but I kind of want to see where this mutation's going... -ALAN

ACTION: I think we need to chop off and treat all these strange growths before treating the source so he doesn't mutate any further.

Not much of Muta is shown in the game, though he can be perceived as approachable and persuadable. His hair is long and brown. Bushy eyebrows and a long goatee tied at the end make up his light face. If you look closely under Muta Bro's orange cowl, you can see his shirt and tie(after surgery). As for bottoms, he wears pants and a pair of socks and sandals.

Use the chainsaw to remove the spikes, then use it again on the big mass stuck inside him. You'll know if you're doing it right if the mass starts to shrink, reducing to a small spike you must extract. (In AS4, using the chainsaw on the mass reduces it to a bruise that must be gelled instead.) Clean up any cuts, then you'll move onto his front. Clear the poison and boils with the syringe or slice and vacuum tactic. Proceeding inside of Muta, all there is to take care of are fires, poison, and spikes to extract. When you move on to the final region, there are even more fires, poison, and spikes, along with the mutagenic serum. Simply extract it with the tongs and fix everything else as same as before.

Muta-Brother complaining about the results of the serum

Within the last region of Muta Brother

"Well that certainly takes the EDGE off things."

An extra pose in AS4 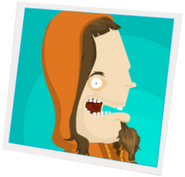 File photo
Add a photo to this gallery
Retrieved from "https://amateursurgeon.fandom.com/wiki/Muta-Brother?oldid=9252"
Community content is available under CC-BY-SA unless otherwise noted.