Ophelia Payne is the main protagonist of Amateur Surgeon 3: Tag Team Trauma and acts as the mysterious deuteragonist in Amateur Surgeon 4: Re-Generations. She must be operated on later in the story, becoming the 66th patient of the game. She reappears in the Epilogue as the 11th patient.

Sometime during her life, Ophelia decided to follow in her granduncle Dr. Bleed's footsteps and went to learn to become an amateur surgeon. She is the student of Dr. Alan Probe.

Ophelia arrives in Alan's control bunker after reading an advert from a paper. There she encounters her first challenge as an amateur surgeon, as Alan has dropped a computer monitor on a small pug. Under Alan's supervision she rescues the pug known as Mr. Giblets, which she later befriends. After a few more tests, Alan sends Ophelia(along with Mr Giblets) on various rescue missions, supervising her from afar.

During her mission at Lunacy Falls, Ophelia encounters a shadowed character closely resembling Horrace D'Obscene. This figure is later revealed to be Horrace's son/clone, Hubris D'Obscene, when he is encountered again after fixing the Reverend's organ in the Church of Robotopia. Believing that Hubris plans to use the missile silo system to spread poison around the world, she hurries to Alan to inform him of this. He plans a trip to the Exile Clinic, where Ophelia meets two members of the Useful Brotherhood, as well as the real Bumps Grinder. When entering the War Room, Alan arrives to help her, only to become a victim of Hubris's deadly trap. Thankfully, Ophelia is able to use everything she has learned to rescue her mentor.

After they realize Hubris had broken into Alan's bunker, they hurry over to find him in the hidden underground Supply Stronghold. He threatens that he will frame Alan's chain of hospitals by poisoning the shipments of healing gel, then create an antidote to sell for his own wealthy gains. His plan is cut short as Mr. Giblets bites him in the crotch, making him lose his grip on the flask of poison he was holding, which he accidentally swallows. Ophelia is at first hesitant to save Hubris, for in her mind he is nothing but a heartless monster. Alan sways her mind however, stating that it would be what her granduncle would have wanted. With Alan's help she is able to save Hubris, destroying the huge mutant worm inside him.

Sometime during the game, Alan brings Ophelia on a tour of one of his hospitals. Through the tour Alan lets her operate on some of the patients. After a very supernatural surgery, she wonders if her granduncle is proud of her as she leaves the hospital with Alan. Unbeknown to her, Dr. Bleed's happy spirit had been watching over her from inside the room, stating that he is in fact, proud of her.

Sometime before the events of the game, Ophelia had put together a new medical team with Mr. Giblets called the Field Hospital. One day she had been snooping around Hubris's secret headquarters for information when she had accidentally released a deadly virus. She became infected, her body beginning to deteriorate in functionality. Thankfully her life was saved by the Reverend, who gave her new robotic implants for her body. However her life was still dwindling from the still present virus, so she decided to take desperate measures, returning to the abandoned secret headquarters to re-generate a clone of her granduncle, Ignacious Bleed II.

Keeping herself concealed from Ignacious, she speaks to him from an intercom to assist him on his new quest to learn everything about Improvised Surgery, hoping that he would learn enough in order to cure her virus. She seemed to also have a goal to find Hubris. Everything seemed to be fine, Ophelia accompanying Ignacious throughout his adventures outside the lab with the Mobitron. A huge obstacle obstructs her path as she sends Ignacious to locate Hubris at the Circus Freak-Out, where he encounters Creepo the Dwarf. Due to the bit of D'Obscene DNA inside him, Ignacious suddenly takes a high interest in Creepo's idea of body theft. Noticing Ignacious' weird change of personality, she tries to stop him, shouting from the Mobitron that what Creepo insists is morally wrong. This has no effect on him, sadly. Therefore Ophelia decides to make her way to the circus herself in order to help Ignacious.

When she arrives, she finds him in one of the huge circus tents. Noticing Hubris along with him, she rushes in and gets in between them to protect Ignacious. Bitterly pleased to see her, Hubris doesn't hesitate to take a chance on further harming Ophelia, throwing a poison-filled flask right onto her body. Covered in the deadly concoction, Ophelia begins to panic and pleads for Ignacious to save her. He quickly obliges and does everything he can to rescue her. He is soon able to kill the lethal tiny bugs that were within the liquid. Grateful for his aid, Ophelia begins to express her gratitude before being interrupted by a disappointed Hubris. Claiming that she had condemned both him and Ignacious to death, he reveals Ophelia's true motive of re-generating Ignacious: to save her own life.

Realizing she has been found out, Ophelia admits that she had brought Ignacious back for that reason, but also because she believed that the secrets of Improvised Surgery would be forever lost after Alan had gave up his career. In order to further explain to Ignacious, she brings him back to the lab, where she has bookkeeper Ygor bring her "the sample". Ophelia reveals that the "key" to the Memotron was part of Alan's brain, and that what she believed what she was doing at the time was right. However she had been filled with immense guilt for what she had done to Alan to obtain it, so she explains to Ignacious that she wants to return it to him and asks for his help.

After a minor room mix-up, they meet a now feeble Alan at the Ol' Grouch Retirement Home, where they perform a lobotomy on him to return his stolen memories.

Ophelia, the voice behind the intercom, has been attacked by Hubris - some vicious cocktail of a disease...I will do what I can!

Ophelia reappears in the Epilogue where she is one of the victims of the "blutation." A catfish is wriggling around inside her and needs to be removed, along with the blue skin the blutation caused. Faker Hubris attempts to escape afterwards, but is quickly caught by the team.

We found a secret passage back to the log cabin, but it appears we're too late! Ophelia has fallen ill with the very same virus we just saw bubbling away under the mansion. We need to rescue her quickly, before the culprit gets away!

In her first debut in Amateur Surgeon 3, Ophelia wore a white doctor's coat over her purple vest and pink undershirt, along with blue jeans and boots. She had glasses similar to her granduncle, Dr. Bleed. Her face had a touch of make-up, present with pink eye shadow, light blush, and matching lipstick. Her hair appears strawberry blonde, always tied in a ponytail. Ophelia was usually kind and mindful of others, though sometimes she would become pretty shocked by some of the situations she faced when helping her assigned patients.

Now that she has aged in Amateur Surgeon 4, Ophelia has become more stern and secluded, traveling around in a life-supporting wheelchair. She is very unsettled and full of guilt due to her current dilemma of being infected and stealing part of Alan's brain. Despite this, she is able to retain a calm manner when speaking with others from the intercom(e.g. Ignacious, Rashid). At first she is worried to confront the others in person due to her appearance. She overcomes this after the circus incident.

Due to the effects of the virus, Ophelia's skin has turned pale with darker lips. A pair of goggles cover her eyes. Her hair has changed into a somewhat whitish-blonde. She wears the same boots and doctor's coat, but this time she has a single black shirt underneath, along with matching pants. One side of her body's limbs has been replaced by robotic implants, which she hides with a red cloth.

Ophelia has a very close relationship with Mr. Giblets, the two being partners since she first began her career in Improvised Surgery. They seemed to have been separated sometime before Amateur Surgeon 4. She expressed a great amount of worry after Ignacious had found him injured at Guru Mountain and was very happy to see him again in the lab after being healed.

When beginning the operation, you will notice 3 suspicious eggs on Ophelia's neck. Use the pizza cutter to slice them open, which will reveal small, strange bugs. Use the car battery to damage them. They will scurry off when zapped, but will not die until you zap the bug for a 3rd time. You can extract the bugs when they are dead. When making the incision into Ophelia's body, slice the eggs and kill off the bugs the same as before, then carefully use the lighter to relight the fire inside each of the engines' openings(indicated by the hanging fire sign).

After relighting the engines in that area, you will have to make one more incision. You will have to repeat the same steps as before, along with using the chainsaw to cut out the broken robotic clock to replace with a spare toy clock. Injections of healing may apply.

In the Epilogue, Ophelia has a catfish inside her body. When it appears, it needs to be zapped with the car battery and attacked with the chainsaw twice each. It will leave behind a mess of scales and poison, the former of which needs to be vacuumed. After the second incision, the catfish will be killed when attacked once. Ophelia's skin color noticeably returns to normal after she is cured.

Ophelia agreeing to save Hubris

Ophelia and the Field Hospital case

Trying to explain her intentions

Ophelia's appearance in the Epilogue, infected

Rare shot of Ophelia without her cloth

Ophelia Past and Present Comparison 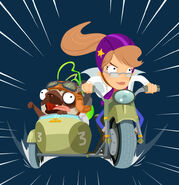 Concept art of Ophelia and Giblets for a loading screen