Procrastibot is an experimental robot who has the ultimate power to freeze time. However, he can only hold the ability for so long before his toaster-powered head finishes up a round of toast.

This is where Procrastibot makes his debut as a surgical partner. Though he does not have a main part in the storyline, he will appear at Ophelia's side in the story's cutscenes if he is chosen as the current partner.

After commending Dr. Rashid for his good work thus far, Ophelia Payne accompanies him in re-generating Procrastibot 3000. He comes out as an aged old dying robot, leading Rashid to operate. With each successful repair, Procrastibot enters through the cycle of life, transitioning from an old man, to a baby, to a teenager, and finally, to his normal adult form.

Though he had been fixed, Procrastibot's internal clock was apparently out of sync, causing him to believe it was the year 1998. However, Ophelia decides to wave this off and calls for an "entire cast party".

It says in the notes this robot was invented to help people who have trouble wasting time. Sounds like my kind of guy! But his internal clock is on the fritz...

In Amateur Surgeon 3, Procrastibot originally had a color palette consisting of grey, red, and green. Later on in Amateur Surgeon 4, he gains a "cosmetic upgrade", now possessing a black, purple, and gold palette. Ophelia even comments on this, stating that he "looks much shinier than he did from Amateur Surgeon 3". He wears a huge gold chain with a clock around his neck, replacing the old alarm clock he had on his chest as a timer. His mouth is indicated by a purple wave line. The purple chemical inside the canister connected to his head is said to be plutonium, which assists his toaster-powered head in freezing time.

Judging by Procrastibot's biographies form both games, he is not very intelligent and is said to have an "unhealthy bread obsession". Aside from that, Procrastibot becomes productive and beneficial when he's needed, a chill expression always present on his face.

When beginning the operation, you will be looking upon an aged Procrastibot. He is in a bad way at 14 BPM, so it's recommended you use the injector on him first. Two shots should be enough. Make the first incision into Procrastibot with the pizza cutter. There are two pieces of candy which must be removed with the tongs. There are several large cuts that must be stapled, cauterized, and gelled. Keep in mind that whenever you cauterise the large cuts on the gas canisters labeled "RU4", it will cause a flame to appear, which can be cleared up with the vacuum (similar to Vince Blownapart). When you have patched up the cuts, there are two pairs of split wires which require a staple in the middle. You will know when you have finished everything in the area when the cogs begin moving.

After a few seconds, the heart rate will increase as you return to a now baby-fied Procrastibot. Slice into him, then patch up the large cuts on the canisters the same as before. There is also a stuffed robot toy that has to be sawed into pieces before removal. When you've accomplished clearing this area, you will return back outside the body again, this time met with a teenage Procrastibot. Slice into him again and extract the "PLAYBOT" magazine and oil can with the tongs.

Then again, patch up the large cuts on the canisters. After clearing up the wounds and fires, the cogs should then move and you will be allowed to close up. You will notice that Procrastibot has finally returned to his normal adult self. 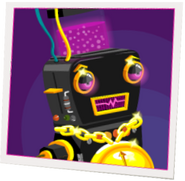 File photo
Add a photo to this gallery
Retrieved from "https://amateursurgeon.fandom.com/wiki/Procrastibot_3000?oldid=8752"
Community content is available under CC-BY-SA unless otherwise noted.