Start a Wiki
Professor Rippov is a Rare type partner introduced in Amateur Surgeon 4: Re-Generations. He appears as the 7th patient (P7) in Dr. Rashid's side quest.

Inventor of the DeLirium and Rashid's idol, Professor Rippov spends his days using the DeLirium for time travel. He can also manipulate time with his damaged stopwatch.

Professor Rippov is re-generated full of radioactive energy. Rashid displays fondness for the Professor and decides to converse with him for a while after surgery. It's revealed Rippov had willingly sacrificed himself to the Re-Generator. Although Rashid appears to look up to Rippov, the intercom thinks the opposite, since his "sacrifices" were simply mailed toenail clippings for Hubris's research.

Today I'll be operating on one of my scientific heroes! Well, a clone of him, at least. Maybe I can get his autograph when I've finished rummaging in his guts.

When beginning the surgery, there's 3 boils and 2 burns on his body. Use the Pain Away to cure burns. There are 2 ways to handle boils. The quickest solution is to use the syringe to suck them up. The other way, which grants more points, is to slice it, causing it to pop. It will leave behind an extra large cut and poison afterwards. Throughout the next 3 areas, you'll not only encounter boils and burns, but also strange radioactive mini clones of Rippov. You can suck them up with the syringe just like a boil. They'll be reduced to poison residue afterwards.

When entering the colon area, rinse and repeat. You'll have to pull out the scanner to find his goggles hidden inside the colon. In the last incision (deeper into the colon), extract the strange, glowing object and rubber glove, then cure everything else as before. 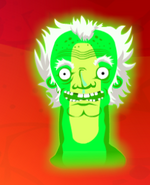 Rippov being picked up by the DeLirium. Alan Probe appears to be the driver. 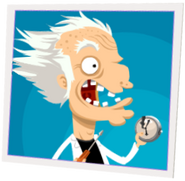 File photo
Add a photo to this gallery
Retrieved from "https://amateursurgeon.fandom.com/wiki/Professor_Rippov?oldid=8517"
Community content is available under CC-BY-SA unless otherwise noted.