He isn't the patient in this operation, his organ is. However, a bonus surgery in AS4 involves himself rather than the organ, where you will need to mechanize some parts of him.

​​So this organ is really the heart of Robotopia? Distributing leaflets in a method that's worryingly similar to a missile silo system... a musical missile system.

(Neat, huh? I always knew there was a way to spice up classical music. This guy found the way! -Alan)

​It looks like somebody's been tampering with the device. Like they were in a rush to find something and didn't care how much damage they did in the process.

(Never rush working on such an impressive organ. Be slow... Rhythmic! Fun times for ALL! -Alan)

​It seems to be getting more damaged by the second, I don't know what's going on in there, but it's nothing good... we should investigate and fix it up FAST.

First, clear away the rust spots with gel and then torch-and-gel the small cuts. Next, cut into the organ and you'll see the circuitry cluttered with robo-scorpion parts, until the robo-scorpion emerges and starts to scutter around. Shock it before it burrows into the organ (similar to the fire mosquito maggots in BugBite Mike.) To catch it, zap the scorpion, clamp it down and uses the chainsaw to destroy it, repeat 2 times. Next, as you heal the cuts and remove the parts, cut deeper and do the same process as before, but deal with more cuts and parts. Once finished, tend to the cuts, apply the fire and heal with gel.

Keep in mind that the Reverend's heart rate is extremely low at the start, being about 12 BPM. You should probably use the injector before cutting into him. Cut into his chest and cut out the organic lungs with the chainsaw. Replace each of them with mechanical lungs with holes on the top. Place and weld the pipes onto the holes using the lighter. Close up here and slice open the Reverend again.Cut and replace the organic heart and replace it with the metal one. Then place and weld the tubes over the holes and close up. The final part of the surgery takes place in the Reverend's brain, where you will need to place the electronic devices and chips into the correct places based on the amount of holes in the brain. Place the cover for the tape player and insert the tape. When you do the latter, colorful static will appear. This can be removed instantly by zapping the screen once with the car battery, but you can also just wait for the static to disappear. The screen you inserted will say, "Be nice to humans..." Close up and you're finished!

The partner special for his Massive Organ is Agent Ted Rando. As for his own surgey is himself. 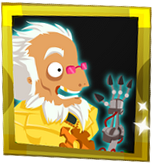 Partner bio from AS3

Partner bio from AS4
Community content is available under CC-BY-SA unless otherwise noted.
Advertisement