Start a Wiki
Robot Unicorn Rainbow is a Legendary type partner in Amateur Surgeon 4: Re-Generations. Originally from the game Robot Unicorn Attack 2, he is the light, healing counterpart of Robot Unicorn Inferno. Both are part of the Team Unicorn pack from the store, though they can also be acquired from the Re-Generator normally.

Modeled after the Robot Unicorn MK II, this magnificent robotic unicorn has come into the world of Amateur Surgeon through the Re-Generator, bringing along the power to heal patients with his rainbow magic. 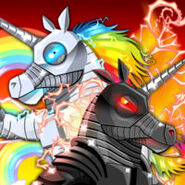 Icon with Inferno
Add a photo to this gallery
Retrieved from "https://amateursurgeon.fandom.com/wiki/Robot_Unicorn_Rainbow?oldid=9079"
Community content is available under CC-BY-SA unless otherwise noted.