The stapler is a recurring tool in the Amateur Surgeon series. It is used to hold large cuts together, allowing them to be burned.

The stapler made its debut in this game. Aside from its usual use, it's also used during Donny Debonair's surgery to staple his nipples and also staple the PIMP plate that he wants inserted, as well as the I on that plate. The stapler also gets a different look for that surgery only.

The stapler doesn't make a direct return in this game. It is instead replaced by Sellotape, which has the same purpose.

The stapler does not return in this game, being replaced by the Needle and thread. It is only mentioned by Alan Probe in the post-op dialogue of Miss Distress's surgery.

The stapler returns in this game and has the purpose as in the other games. Large cuts will not appear stapled until they actually are. The fully upgraded tool can allow the player to leave a trail of staples along the wound with a quick drag of the finger, making closing wounds must faster.

The stapler has the same purpose except it holds the risk of leaving behind unwanted staples if the player misses with the tool. The more you upgrade the stapler, the less likely this risk can happen. 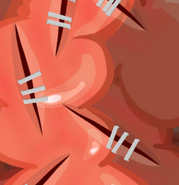 Staples on the large cut 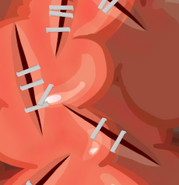 A staple that does not appear on the cut like normal.

Community content is available under CC-BY-SA unless otherwise noted.
Advertisement