Start a Wiki
Stoolie O'Toole is a Common type partner introduced in Amateur Surgeon 4: Re-Generations. His surgery is found under the label P20.

Stoolie is an army medic who has the high reputation of being a chicken. Since he fears the sight of blood, Stoolie has gained the ability to perform surgery with his trusty blindfold on. Due to a heightened sense of mind, he's able to detect hidden/hard-to-see injuries while blindfolded.

Stoolie is re-generated during Dr. Rashid's small quest in fixing up the rest of the partners. He has come out full of his own bullets in his body, alongside a huge missile. When he is healed by Rashid, Stoolie becomes frightened and confused by his surroundings. He also expresses much grief over his wounds being healed, feeling as if his "mementoes" had been stolen from him. Rashid decides to help the poor medic back into the Re-Generator, Ophelia questioning how Stoolie even ended up inside there in the first place.

What an honour, to meet a military field surgeon. This chap would be a perfect recruit for the Field Hospital team, if he weren't riddled with ammunition.

Stoolie appears with a brown skin tone, dark hair, and a mustache, accompanied with a five o'clock shadow. He wears a green army uniform with a brown belt and black combat boots. He has a small pocket visible on the chest, while his belt carries two pouches. A white band with a red medical cross wraps around his arm. His army helmet has the same symbol on its front. A poker card with a spade rests on the side of the helmet. His red blindfold he uses for surgeries is wrapped around his head. He has a bit of blood covering parts of his body.

As stated in his bio, Stoolie is well known for being a coward. Despite this, he's willing to help others and lend his special ability when needed.

Fittingly, Stoolie has many hidden injuries that will have to be located with the scanner throughout the entire surgery. There is a huge end of a missile poking out of his chest, but you can't remove it yet. For now, focus on using the scanner to locate the four hidden missile along the left side of his body. Use the pizza cutter to reveal the bullets, then extract them with the tongs. Patch up the left over bullet holes with the stapler, lighter, and gel. Then you should be directed to make an incision into the body.

Inside the body, there are three hidden bullets. After you locate the bullets, this will allow access to the missile's head. Remove the bullets and patch up the holes, then focus on sawing off the head of the missile with the chainsaw. Removing the head will reveal a bomb. Extinguish its flame with the vacuum, then extract it from the missile. Saw off the side tips, then you will be brought outside of the body to remove the rest of the missile.

Stoolie a bit paranoid after surgery 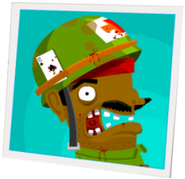 Stoolie's bullet
Add a photo to this gallery
Retrieved from "https://amateursurgeon.fandom.com/wiki/Stoolie_O%27Toole?oldid=8525"
Community content is available under CC-BY-SA unless otherwise noted.