Pete is a gourmet chef for Kannibal Korner. He had moved into the area in order to "liberate" his choice cuts, which are highly implied to be human body parts.

One day he tried to get to the village with his supplies on a flimsy raft over a piranha-infested river. Somehow the raft tipped over, allowing the piranhas to chow down on him and gnaw off his legs.

OBSERVATIONS: My imagination's having an unpleasant field day working out why a chef has freezers of human remains BEFORE we factor piranhas into the equation.

(​It's rarely as bad as you think! He was probably just going to COOK and EAT the bodies. -ALAN​)

SYMPTOMS: ​Patient is infested with piranhas that have EATEN HIS FREAKIN' LEGS!!! Judging by the contents of his fridge, I assume this is a kind of karmic justice...?

(I can we can safely say symptoms include delicious legs! -ALAN)

ACTION: I... urgh... can't believe I'm saying this, but there is no shortage of spare legs on ice. First I'll patch him up. Then I can get on with repressing all of this.

The player must use the tongs to remove the dead piranhas lodged in his body and tend to the jagged large cuts and small cuts by applying staples, fire and gel in that order. Next, the player moves on to the right leg and does the same thing with the body. Then the chainsaw is used to slash off the eaten part of his leg, which is replaced with a leg from the freezer. Then, the inside of the legs are where the heart drops fast. The player must clamp down the burst arteries and twist them in a clockwise pattern to close them. Then align the veins and bones in place and sear them with the lighter and apply gel. Do the same thing with the left leg and the surgery's done.

Finding Pete on his raft

He's quite dizzy from blood loss

Pete has new legs, but does not wish to be exposed to the cops.

Therefore he proceeds to sneak away offscreen. 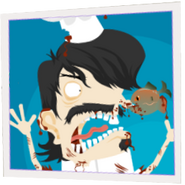 File photo
Add a photo to this gallery
Retrieved from "https://amateursurgeon.fandom.com/wiki/Sweetmeats_Pete?oldid=8260"
Community content is available under CC-BY-SA unless otherwise noted.