Tammy Gracefuls is a young woman who seeks riches by means of theft similar to her brother, Tommy Gracefuls. However she takes a different approach by raiding various tombs and temples.

After a plane crash, Tammy attempts to explore the Hidden Grotto within Mumbo Jungle. Unfortunately, she sets off a trap at the entrance, which sends a whole bunch of spikes launching at her. Unable to react quick enough, the spikes impale her entire body. Noticing Ophelia near the grotto, she staggers over to her and asks for help before spazzing out due to the snake venom from the spikes.

After Ophelia exterminates the snakes and sucks up their venom, Tammy graciously thanks her for the fast recovery, then eagerly returns to her tomb raiding, despite Ophelia's disapproval.

OBSERVATIONS: Graceful by name, riddled with horrific puncture wounds and snakes by nature. All part of the job when tomb raiding I guess...no treasure is worth this!!

I'd buy a security system that launched snakes at intruders. Practical and hilarious. -ALAN

SYMPTOMS: Snakes. I didn't think that was something you could class as a 'symptom' up to this point. Almost distracts you from the giant spikes jutting out of her.

It's like a big game of snakes and ladders, only the ladders are pointy and highly poisonous! -ALAN

ACTION: Removing poison and stakes should be pretty straight-forward. As for the snakes, we need to delicately lure them out and incapacitate them with minimal trauma...

Jiggle her until the snakes pop out and chainsaw the HECK out of them. The delicate touch! -ALAN

Similar to her brother, Tammy seems quite determined to obtain her desired goal, despite the mishaps she encounters along the way. Tammy is shown wearing casual explorer gear, along with a cute little bow she has tied onto her belt. Her hat covers her messy hair bun. Furthermore, underneath her shirt, she wore a pink bra with a leopard/cheetah/jaguar pattern.

Extract the stakes with the tongs and rid the poison leftover with either the syringe or the cut and vacuum tactic. To take care of the unwanted snake guest, shock it with the car battery when it pops out from its flesh hole then chainsaw its body to damage it. It will retreat to its hole then pop out again. Redo the same shock and chainsaw for two more rounds, then the snake will flop over dead. Extract the snake and close up the wound(in Amateur Surgeon: Re-Generations you'll have to take care of leftover poison with the pizza cutter and vacuum.)

When you advance on to her stomach, there will be more stakes to extract, more poison to get rid of, and more snakes to kill. Remember not to take too long handling everything, for you'll have to replace Tammy's poisoned stomach. The organ transplant is the final part of the surgery. 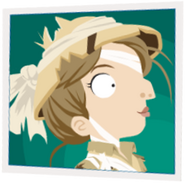 Art of Tammy tending a shop

Tammy in the Partner Special from the third surgery of Through the Ages
Add a photo to this gallery
Retrieved from "https://amateursurgeon.fandom.com/wiki/Tammy_Gracefuls?oldid=8259"
Community content is available under CC-BY-SA unless otherwise noted.