Start a Wiki
The Great Contort-O appears as the 56th patient in Amateur Surgeon 4: Re-Generations, his surgery labeled as Monster Part II. He is one of the many performers from the Circus Freak-Out.

Sometime before the events of the game, Contort-O had been approached by Hubris D'Obscene after one of his shows. Winning him over with feigned flattery, Hubris tricks him into sniffing a rag full of chloroform, knocking Contort-O out and kidnapping him.

Bringing the unconscious creature to the underground lab, he places him into one of the vaults in an attempt to create a bio-weapon. Through the oddity of mad science, he ends up fused inside of another creature. This causes Contort-O to become filled with extreme self-hatred, beginning to have heated arguments with himself from inside the pink monster. Hubris grows tired of this rather quickly, so he installs a device into his brain which restricts his ability to speak. This is later removed by Ignacious Bleed II.

Contort-O is discovered years later by Ignacious II, his body parts removed from the other monster's insides. Regaining his intellect, he requests that Ignacious put his body back together. In return he tells Ignacious vital information about Hubris and his whereabouts.

Operating on the vault creature has revealed a further complication: a dissected entity inside! The task is simple: reassemble the new patient. Unfortunately, "simple" does not mean "easy".

Contort-O is a creature who seems to be made up of a bunch of different species. Half of his torso and face seem to be that of an amphibian-like monster, while the other half of his face appears demon-like. The skin of these two parts wrap around his very huge brain. The rest of his body are human body parts, along with a single bird leg (most likely a chicken's). A pipe sticks out of the side of Contort-O's head, which helps support his glasses. Contort-O is very smart, yet very gullible.

When beginning the operation, you'll be given pieces of Contort-O's body to put back together like a puzzle. However his heart rate is low, so you may have to boost him with the injector as you work on putting his pieces back together. After placing all the body parts, you'll be given his glasses to place near his eyes. Burn and gel the body parts together, then you will be brought to his torso. A neat side effect is that Contort-O's heart rate will rise tremendously. For the remainder of the surgery, you will have to patch up small/large cuts and replace Contort-O's lungs and heart. 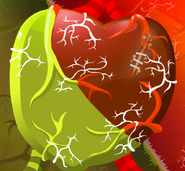 Contort-O expressing his dislike for Hubris

unhappy Contort-O fused into a bio-weapon
Add a photo to this gallery
Retrieved from "https://amateursurgeon.fandom.com/wiki/The_Great_Contort-O?oldid=7544"
Community content is available under CC-BY-SA unless otherwise noted.