Start a Wiki
The Polymorph is a partner who appears in Amateur Surgeon 4: Re-Generations. It has an unlockable surgery, labeled under P6.

Presumably one of Hubris's insane creations from the lab, the Polymorph is a peculiar specimen, able to shapeshift into any person of its choosing. The in-game bio states that it had acted as the Useful Brotherhood's entire admin for a straight 18 months.

While fixing the partner files, the Re-Generator begins performing at a snail's pace. Deciding to engage in a tea break, Dr. Rashid settles with his beverage trolley as he waits for the Re-Generator to load. What he doesn't know is that the Polymorph had been released from the machine, lurking around the back of the lab. It chooses to mess with Rashid, transforming into Barbara Ho-Tep.

When approaching Rashid, it easily fools him. As he turns his back to offer "Barbara" some tea, Polymorph then transforms into Filthy Nowe. This causes Rashid to freak out as he turns back around, bewildered as to how Nowe had escaped from the Re-Generator. Afterwards Polymorph transforms into a mirror image of Rashid himself, as to which he responds with "I think I need a lie down".

Rashid is then left to operate on the Polymorph in order to balance its shapeshifting frequency.

There must be something wrong with the Re-Generator. It has created a hideous beast which seems to have the ability to mimic different humans!

The Polymorph is nothing but a brain with a pair of eyes and teeth, supported by a strange mass of yellow substance. This is partially covered by a black and red cowl. Not much of Polymorph's personality is shown, so it's pretty much open for interpretation.

When starting the operation, you'll notice the Polymorph has transformed into Barbara. Make the incision and slice off the wrapped bandages with the pizza cutter. Extract the sliced off bandages, then take care of the poison with the syringe or pizza cutter (followed by suckage with the vacuum). There's 5 hidden items you'll have to find with the scanner to poke out with the cutter (you may or may not have sliced out a gold key while slicing off the bandages). Extract the located objects with the tongs, then you'll be taken back to Filthy Nowe's body. When you enter with the cutter, extract the lodged objects.

Use the chainsaw to remove the clear tubes. Slice the bandages off of Nowe's bird, Evermore, which will fly off after removing the bandages (and if everything around is patched up), allowing you to place the tubes back in their rightful place. The slightly curved tube goes on the right side, while the straight piece goes on the left. Now you'll be taken to slice into Mr. Giblets. Remove the bandages once again, along with ridding the boils and poison with the syringe or pizza cutter. Pick up the stray tube with the tongs and place it back where it belongs, then extract the small key.

This is the end of the surgery and you'll be taken to patch up Polymorph. But you should take caution and wait for it to settle back into its regular form, since the closing incision will change positions as Polymorph transitions.

it decides to play games with him

Can you tell the difference? 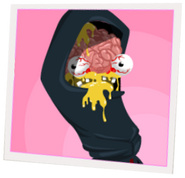 file photo
Add a photo to this gallery
Retrieved from "https://amateursurgeon.fandom.com/wiki/The_Polymorph?oldid=8513"
Community content is available under CC-BY-SA unless otherwise noted.