He is an elite Irish cage-fighter who has "been through the wars" (though Alan assumes he's been through a blender or some kind of farm equipment).

Shame-Rock enters in a wheelchair, his limbs covered in casts. He boasts about his skills as an elite cage fighter, stating that the opponent from his last match had it way worse. However he is in need of some liver detoxification and bone replacements.

I could never remember if the "luck of the Irish" means you have good luck or bad. Thankfully, this cage-fighting patient has cleared up the mystery once and for all. Or maybe it's not about luck at all — he's just really bad at his job!

Shame-Rock appears wearing a green leotard with a worried looking shamrock printed on it. He has dyed his mohawk, eyebrows, and beard a matching green. It can be assumed his natural hair color is red by looking at the various thin hairs that appear on his body(ex: his armpits). As a fairly built man with a chubby lower body, one can say Shame-Rock is full of pride and self-assurance, keeping a huge confident grin despite his current situation.

Cauterise the wounds on Shame-Rock's body, then you'll make an incision into his liver. Suck up the poison with the syringe and vacuum up the poison (or alternatively slice and suck it up in AS4's case). Afterwards you will be taken to his broken shin, which needs to be sawed out and replaced. There are also little bone pieces that need to be extracted with the tongs. When finished with the shin, the final bone that needs to be replaced is his leg bone. Remember to use your super surgical extracting skills to pull out the tiny awkwardly-shaped bone pieces.

The other guy had it WAY BAD

Shame-Rock from the Pagoda of Pain 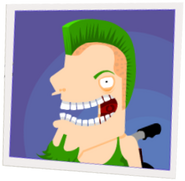 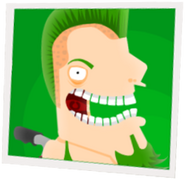