Tommy is a burglar who's not so good at pulling off heists. It can be assumed that Tommy has gone through many failed attempts of thievery, since he is a recurring patient throughout the series(AS1, AS Hospital, and AS2.)

It's known that Tommy has a sibling, who's name is Tammy Gracefuls.

While attempting to steal from the empty warehouse, Tommy somehow stumbled through a glass window, falling onto the floor right in front of newbie surgeon Alan Probe and mentor Dr. Bleed. Excited to see a potential patient, Alan goes up to him and offers him a glass extraction.

In the post-op cutscene, he states that he recognizes Dr. Bleed, implying that he might have been a former patient of Bleed's while the Old Hospital was still active.

Neither the brightest nor talented of thieves, the patient is more of a danger himself than to anyone's jewels, family or otherwise. Patient has taken a nasty fall through a window while failing to burgle a largely empty warehouse. Several extractions required to fix the pain in the glass.

Bradley brings in an injured Tommy to Alan Probe in order to get the glass removed from his body. It's unknown whether or not if he was robbing the home or was residing there.

It's a masked blast from the past! Was he robbing the Old Folks Home, or does he live here now?

Either way, Tommy here is in urgent need of a glassectomy — and that's just the start of his troubles…

Not much is known about Tommy. However he seems to have a sense of humor, even cracking jokes at his own mishaps, along with a touch of persistence. He is always seen in a hoodie, cap and jeans with a blindfold with holes cut in it to act as a mask. If one looks at his front view during pre-op, he appears to have a few gold teeth.

A straightforward extraction. Use the tongs to pull out the several glass pieces around Tommy's body, along with stapling and cauterizing various cuts. The only other area where you'll have to repeat these steps is his lungs.

Acting as one of the tutorial levels of the game, there are a few cuts on Tommy's body that must be cauterized and healed. Then the player will have to extract pieces of glass when making the first incision into him.

Alan: Hello mister burglar! Fall through the window trying to rob our clinic?

Alan: Yep! You're in luck - today's special is glass extraction!

Tommy: There was a doctor got himself into a heap of trouble a few years back... lotsa unexplained deaths.

Tommy: Then he just disappeared...

Alan: Hmm. So, was it true what he said? You're a doctor?

Alan: Can you teach me how to cut - I mean, help people?

Bleed: Alright, Alan. But we may have to improvise with the tools a little...

Alan: ...by the way, your friend in the doorway appears to be bleeding messily to death on the carpet.

Alan: Woo hoo! I'll fix him! I can't get in trouble if YOU came to ME!

Alan: Bring him through to the toilet! My skills are as rusty as my tools, but I'm sure it'll all come back to me!

Alan: Hmm, sorry about that. They don't usually bleed as much.

Alan: Heh! That's what they all said, back in the day!

Alan: ...right before all my hospitals got shut down by the government for being "farcically unsafe".

Aide: Mister Probe, allow me to introduce myself.

Aide: Bradley! Yes. That will do!

Bradley: I represent a person who would like to give you another chance to practice surgery again...

Alan: Hey! They'd have to be pretty brave! I wasn't kidding when I said I was rusty!

Bradley: I figured that might be an issue - but I may have the solution! Let me explain...

Hubris: Here we are in the Jurassic period. The local fauna will provide invaluable research opportunities

Hubris: But first things first, let's see If we can find a way out of this dark smelly cavern.

Tommy Rockpiles: Why thank you for releasing me from that awful organ, my good man

Tommy Rockpiles: I wandered in here some time ago and couldn't for the life of me find my way out again!

Tommy Rockpiles: I've spend most of my time down here rubbing rocks together to produce this pretty red burny stuff!

Tommy Rockpiles: Say... you wouldn't happen to know the path to the exit would you?

Hubris: Yes, unfortunately I do... You'll probably want to hold you nose.

Tommy GROKKF1LE5: Quiet back there! I need to concentrate.

Hubris: So much for natural selection.

Hubris: What was it you said back there, something about "Hubricorp"? What an interesting name.

Tommy GROKKF1LE5: Oh no, man. These drecks are the fraggin' worst.

Tommy GROKKF1LE5: They control the media, the school system, even the vending machine indrustrial complex! 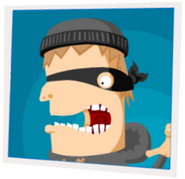 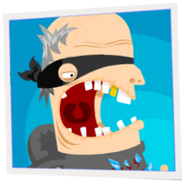 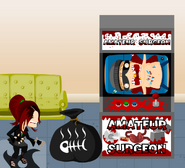 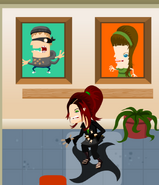 Tommy's portrait next to Aureola's in Amateur Ninja 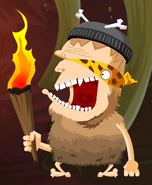 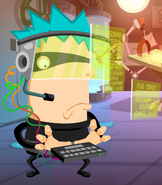 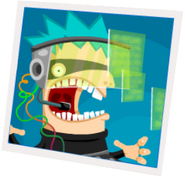