Tricks is an age old psychic performer, who treats his audience with fortune telling and mind reading with his huge brain. It's known he can also project his thoughts into others' minds, as shown when he had made Bradley spout a few awkward lines of dialogue to his grandfather Alan Probe. He can always sense one's presence, hence he "already knows you're coming", though this also applies to his psychic abilities in general. Despite this, he was ambushed by Creepo the Dwarf, though it could be he had found a way to conceal his presence from Tricks somehow.

Earlier before the current events of Circus Freak-Out, he was hit in the head by Creepo to keep him from interfering with his plan. This damaged his brain, weakening his psychic abilities. When Alan and Bradley are directed to Trick's caravan by Manfredd, he's able to transfer his thoughts into Bradley's mind for a brief moment to convince them of his psychic capabilities before requesting help.

After Alan mends his brain, Tricks is able to sense the Ringmaster's brain nearby, resting in Trick's jar where his prop brain used to be. This leads Alan to his next task.

This patient claims to have, up until recently, been the owner of some quite potent psychic powers.

Tricks is quite passionate about his abilities and will not hesitate to demonstrate them to others. He's persistent in proving his powers, such as projecting an image (or possibly the real spirit) of Dr. Bleed to Alan when he had labeled him as a fraud. He's light skinned and possesses white, balding hair. These hairs peek out of his tiny chin. His head is larger than normal due to his powerful and enlarged brain. He wears a long purple cloak over a black suit. His cloak has a striped design rowed with stars on its sleeves, while he wears a silver triangle-shaped item on his chest which resembles the Eye of Providence.

*This follows the solution for Amateur Surgeon 4.

You'll encounter boils throughout this surgery. You can use the syringe to cure them or use the slice-vacuum method. Cure the boils from the stomach and then from within the liver, along with some cuts. In the liver, there will be the AS1 variation of poison as well, so the slice-vacuum method will be necessary. After the liver, there's a lung transplant to perform with the saw. For these lungs though, you only have to slice around the whole part. Afterwards, you'll have to rid the brain of boils and burns. 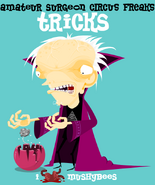 Pre-op from the original game

Pre-op from remaster
Add a photo to this gallery
Retrieved from "https://amateursurgeon.fandom.com/wiki/Tricks_the_Psycho_Man?oldid=9264"
Community content is available under CC-BY-SA unless otherwise noted.