Chuckles is a clown, apparently one who performs at kids' parties. He has a terrible knack of getting his rabbit up his behind by accidentally sitting on it.

Whilst entering the bathroom, Chuckles startles Alan, who is deathly afraid of clowns. However he is later able to maintain himself, lending Chuckles a hand with his rabbit fiasco.

Sorry... Just had a bit of a moment there. Everyone has a right to dress as they please,and a right to surgical help if they need it... But there's just something about Clowns that is so... WRONG!

Clad in a goofy bright outfit and clown make-up (along with a big red nose and curly pink hair), Chuckles can be quite cheery and joyful, but alas he can seem somewhat depressed since kids are implied to be scared of him. Even Alan Probe himself is afraid of the clown. He tends to carry around two horns, even holding them during the surgery.

In AS2, one used to use the pizza cutter to slice open Chuckles' nose and simply cauterise the leftover wound, vacuuming up the massive amount of blood if they pleased. This was changed in AS4 however, where now the player has to saw the nose off with the chainsaw for replacement. Everything afterward is the same. When cutting into Chuckles, you'll encounter a white dove, which needs to be zapped with the car battery. It will then escape offscreen and fly overhead*. Wait for it to return, then zap it again. After zapping it a third time, extract the dead bird and suck up the leftover feathers.

When that's done, all you'll have to do is retrieve the bunny from Chuckle's stomach. Find the missing bunny with the Ultrasound (already exposed in AS4) and use the tongs to pull the rope until the bunny pops out. Plop it in the tray and close up. 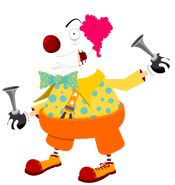 Uncle Chuckles from title screen (AS2)

However it seems to be the norm for the clown

But that doen't end well...
Add a photo to this gallery
Retrieved from "https://amateursurgeon.fandom.com/wiki/Uncle_Chuckles?oldid=8680"
Community content is available under CC-BY-SA unless otherwise noted.