Jade isn't your everyday tough biker chick. She has taken a long pilgrimage to the sacred shrine of Robotopia, allowing Reverend Apocalypse to fill her with robotic implants. One of these noticeable parts is her eye, which began to gradually deteriorate over time. This leaves her blind on one side and affects her driving.

Jade travels to the Robotopian Shrine on her motorcycle to have her blind robotic eye fixed. However, Rev. Apocalypse is nowhere to be found. Ticked off, she is about to take her leave when Ophelia Payne shows up at the shrine. She is at first untrustworthy of Ophelia, believing that she had something to do with the Reverend's disappearance. She soon lightens up as Ophelia offers to help fix her eye and locate the Reverend.

Jade becomes impressed with Ophelia after she replaces her old eye with a new and improved one. She then ponders with Ophelia about the Reverend's whereabouts before leaving the area.

OBSERVATIONS: So Jade makes a regular biker pilgrimage to Robotopia to upgrade her bionic implants how often? This "eye" looks pretty outdated and unreliable...

The way I see it, you can have working eyes or can look AWESOME. Not both.-ALAN

SYMPTOMS: I think an upgrade IS in order, in fairness. All these old parts are on fire and/or exploding. I'm no robotics expert, but that hardly seems ideal?

Electrical fires and rust never hurt anyone! Except for severe burns and tetanus.-ALAN

ACTION: I'm no mechanic, but I don't think substituting this spare eye could make things any worse? Hopefully it won't make the patient any more dead...

Hard to tell with machinery. Human patients at least have the decency to scream!-ALAN

Jade appears wearing a torn leather jacket, jeans, and boots. Her hair is accessorized with a bead chain and two feathers. She wears a skull-patterned bandana, which covers the small metal hatch implanted on her forehead. A single earring decorates her ear and a scar is visible across her eye. Her old robotic eye was worn out and cracked, the pupil would even lazily rest on the side of her eye. This was replaced by a bright glowing red one.

Jade usually expresses a tough and slightly intimidating attitude, but she is friendly to those she trusts. She has a close relationship with the Reverend, for he had given her a robotic eye when she had lost her real one long ago.

Use the pizza cutter to slice into the eye, then suck up the fire with the vacuum. Cauterize the wounds, then slice deeper inside. Here you'll have to take care of more wounds and fire. When everything's patched up, use the chainsaw where directed and saw off the old part and replace it with the new one. Each time you replace a part of the eye, fires will start which you'll have to extinguish. When all parts are replaced, you'll be able to close up from the eye. All you need to do after is saw off the eye to replace with the spare one.

Jade irritated by the Rev's disappearance 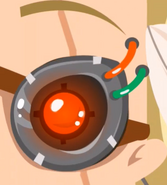 Closer look at the spare eye 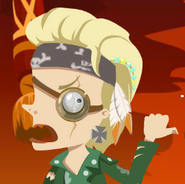 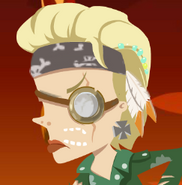 another instance
Add a photo to this gallery
Retrieved from "https://amateursurgeon.fandom.com/wiki/Upgrade_Jade?oldid=8266"
Community content is available under CC-BY-SA unless otherwise noted.