A recent member of the "Useful Brotherhood", he acts as a willing guinea pig for Hubris's concoctions. It's unclear whether or not he was part of the staff or a patient within the Exile Clinic. There's small evidence that he may have been a patient, for he exhibits small signs of mental madness. However this could just be an effect of Hubris's brainwashing.

Currently a test subject for ice ants, Useful is very cold and quickly dying from hypothermia. Ophelia makes a deal to save him in exchange for info about Hubris's plans.

This guy has a few screws loose - claims to be part of some 'Useful Brotherhood' and is helping 'Brother' Hubris achieve a greater good...

Looks like he was being used as a test subject for some sort of ice ant. Not sure how the tools will hold up against these things...

Nippy little nuisances, aren't they? Who knew frostbite could be so literal!-ALAN

Should be able to kill these ice ants like any other parasite, but I'm worried they might fight back...Going to have to be careful...

Can't we just pour antifreeze on these guys and call it a day? That's how it works, right?-ALAN

Useful Brother is shown as a young man who's a bit not right in the head. However he seems harmless and dimwitted, claiming to have made a bunch of merchandise for the "Useful Brotherhood" such as T-shirts, stickers, and hats. He is also seen as devoted, for despite everything Hubris has done to him, Useful remains loyal to him.

It can be assumed he wears a long-sleeved shirt under his assigned blue-orange cowl and hat. Under his hood, he possesses dark and disheveled medium-length hair. Along with his green pants, he wears very slender boots. He has been given a golden mask to wear, concealing part of his face. In his initial appearance, Useful Brother had an unnatural blue skin tone due to the dropping temperature of his body. When cured from the freezing ice ant serum, his actual skin tone is revealed to be very light. A distinguishing little trait of Useful Brother are his pupils, which appear very small to symbolize his "loose screws".

This surgery seems threatening at first glance(in the 3rd game you can even hear the pitter patter of the many ants from outside of Useful.) However if you keep a calm head you can pass it in a breeze. Use the lighter to melt the various frostbite then use the car battery to kill the ants. Try to be quick but accurate(in AS3 missing while frostbite is present may stun Ophelia, rendering you unable to use your tools for a few seconds), then after they are all dead extract them all from Useful's body. You'll have to deal with the ice ants for one more region. Do the same as before, along with mending the star-shaped scar.

Useful back to normal

the star shaped scar within Useful 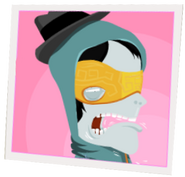 Add a photo to this gallery
Retrieved from "https://amateursurgeon.fandom.com/wiki/Useful_Brother?oldid=9124"
Community content is available under CC-BY-SA unless otherwise noted.